If you kept changing your major and rethinking your career options while you were a UW student, you had lots of company, according to the first truly comprehensive study of undergraduate education in the nation—UW SOUL.

When freshman Chris Flores arrived at the University of Washington in 1999, he made sure his schedule included a computer science course. He planned to major in business information systems. That was his thing—or so he thought. "I made my high school's first Web page," he says. But when he graduated five years later, his degree listed neither business nor computer science.

When Rachelle Rochelle started at the UW that same year, her favorite course was in communication. “I loved it,” she recalls, “so I decided to major in communication.” But the following year, she realized that studying history challenged her more—and that she liked being challenged.

And when Jeff Eaton arrived at the UW at age 16, he was keenly interested in math. That interest continued, but soon he was also doing serious work in the arts and social sciences, and studying abroad as well.

In their years at the UW, all three students changed in ways they couldn’t have predicted. That’s not unusual. But in the late 1990s, UW Research Scientist Catharine Hoffman Beyer and her colleagues wondered which parts of the college experience exert the most positive and negative influences. So they spent four years testing, talking with and otherwise learning about Rochelle, Flores and 302 other UW undergraduates.

The result is the University of Washington Study of Undergraduate Learning (UW SOUL), the first four-year, comprehensive assessment of learning among a large group of American college students. Educators have researched college learning for years, but none with the same breadth and depth—or with so much student input. “Frequently lost in the myriad of statistics was the authenticity of student voices and experiences,” says educator and author Peter Ewell.

Now that its findings are public, UW SOUL is changing the way students learn at the UW, Nationally, it’s influencing debate about standardized testing of college students.

Flores and Rochelle were freshmen when they entered the UW, part of the 64 percent of UW SOUL participants who were first-year students when the study began (the remaining 36 percent were transfers). As a group, UW SOUL students were similar to their UW peers except for somewhat higher test scores and grade point averages, and with minorities better represented.

Each participant completed more than a dozen Web-based surveys and answered approximately 24 open-ended e-mail questions about his or her experience. Probing went beyond the surface: What kinds of writing and quantitative reasoning were faculty members asking for? How did students deal with their assignments? How did they experience diversity? How were they using information technology? What experiences outside the classroom were most important? To what extent were faculty members asking them to reflect on their learning?

The study revealed some striking similarities in the way undergraduates develop, and some equally striking differences. Every student changes in his or her own way over the course of the four years—but they all change. Interviewed during their senior year, about 85 percent of UW SOUL participants identified at least one decisive moment or influence, what the researchers call a “turning point.” These frequently involved internships, service learning, travel abroad or research with faculty members. Many students responded favorably to situations that challenged them. But they needed time to choose the right challenges.

“The more students self-assess, the more they become engaged learners and critical thinkers”

Flores, the son of a retired Navy supply chief and an at-home mom, entered the UW at 18. He liked his courses, particularly in computer science, but also business. As a sophomore, Flores decided to major in business but couldn’t meet the grade requirement. Disappointed, he switched to informatics, but was again rejected because his grades weren’t strong enough. “It made me feel pretty bad,” Flores would later recall.

While struggling with these matters, Flores took a couple of geography courses, mostly to fill in graduation requirements. Gradually, and to his surprise, the subject grabbed him. “I found geography has an interesting human aspect,” he says. “It’s the study of people in relation to place.”

In a focus group with other UW SOUL participants his senior year, Flores said, “Geography has opened my eyes to the inequalities around us. Geography has changed how I think. I was open to poverty before, especially since I came from the Philippines. But before I came here, I was interested in making money. Geography changed this. I am still interested in (computers and technology), but now I have this desire to change the world. I am interested in teaching, and after I graduate, I am going to join Teach for America. I want to help empower people with education.”

Rachelle Rochelle also found exhilaration in a subject that stretched her and challenged her preconceptions. She wound up switching her major to history because it demanded more of her than communication, her initial choice. She’d taken a history of labor course and hadn’t done as well as she wanted. But the experience was a blast, she says. “The course pushed me into areas I didn’t know, and I had to learn new processes. I really got into studying; I wasn’t just looking for simple answers.”

Consistent with the experiences of Flores and Rochelle, and contrary to the image of the intellectually lazy undergraduate, UW SOUL found that the majority of students—75 percent in their first year, 89 percent by their third year—do a good deal of class research beyond what’s assigned. They also tend to hold themselves accountable. Students who got behind in their work said it was usually their own fault—mostly because of such things as procrastination, personal issues or failing to ask for help. 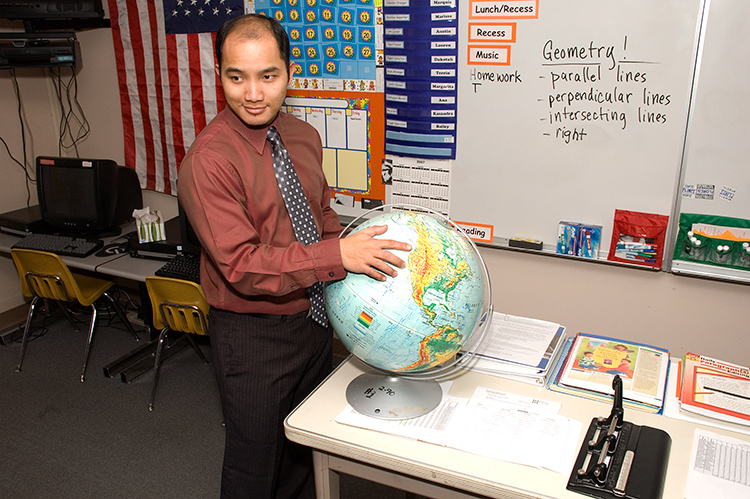 Chris Flores, ’03, changed his intended major three times as an undergraduate. He is now a fourth-grade teacher in Federal Way. Photo by Kathy Sauber.

Some students created their own challenges, then rose to meet them. Recent UW graduate Leah Schrager initially majored in dance, then added biology as a second major. An improbable combination, perhaps, but she liked how the two pursuits informed each other. “Lots of things about dance apply to biology, like how the parts of the body work together,” says Schrager (pictured at top with dance partner Ben Rapson). The physical discipline also helped. “In dance class, you have to do things immediately, on the spot, so I approached biology the same way. I tried to understand ideas immediately in class instead of just taking notes, planning to understand later.”

This past year, Schrager and fellow UW student Shannon Narasimhan received a $12,000 Mary Gates Endowment Venture Scholarship to stage “Getting Undressed: A Performance Art Piece.” A combination of dance, drama, music and creative writing performed at the Ethnic Cultural Theater, the piece portrays a group of young people exploring emotional boundaries. Schrager had kept a weekly journal all through college, but writing a proposal for the scholarship encouraged her to synthesize four years of learning.

That sort of self-reflection, the study found, is another source of educational energy for many undergraduates.

Peers are influential, obviously, but the study revealed that faculty members make the key difference. “Through all our methods of asking,” Beyer and her colleagues write, “students told us that what helped their learning the most were faculty.”

Professors and faculty mentors have strongly influenced Eaton. Earlier this year, he returned from South Africa, where he worked with Sociology Professor Samuel J. Clark to determine the extent of HIV among 21 rural villages in the Mpumulanga province of northeastern South Africa. Eaton has also helped study circumcision as an intervention strategy, as some research has shown circumcised men less likely to acquire HIV than uncircumcised ones. “It’s been pretty invaluable to have someone who knows what he’s doing, especially since I’m considering an academic career,” Eaton says. 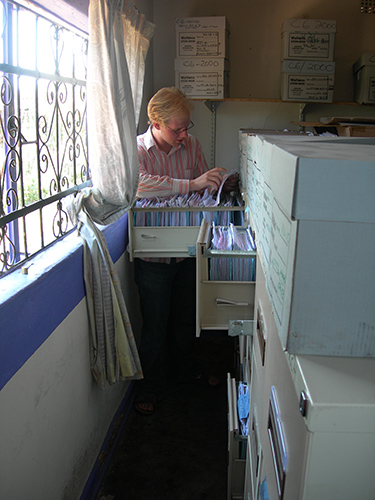 UW senior Jeff Eaton added a master’s degree and another bachelor’s degree to his original B.A. in mathematics. Photo courtesy of Jeff Eaton.

UW SOUL has also helped UW administrators make changes in the undergraduate experience. They’ve expanded the Honors Program and hired a new director, Philosophy Professor Jim Clauss. They’ve given additional resources to programs like the Discovery Seminars, which bring new students to campus for one four-week, five-credit course in August, before the academic year begins. Started in 2003 with 400 students, Discovery Seminars grew to 600 students this year.

Exploration Seminars have also been added. They offer travel, some domestic, but mostly international, with a course attached. This past August, 29 course offerings included such subjects as “Coffee: Corporations, Communities and Consequences” in Costa Rica and Nicaragua.

Also for the last four years, the College of Arts & Sciences has funded departments and programs willing to identify learning goals and assessments for their majors. So far, Beyer and her colleagues have worked with more than half, including astronomy, geography, sociology, dance, digital arts and economics.

While Beyer and her colleagues track diverse learning, some educators advocate standardized testing for college students. An outgrowth of “No Child Left Behind,” the movement’s exponents include U.S. Secretary of Education Margaret Spellings. About 40 colleges around the country are using one test, the Collegiate Learning Assessment.

In a recent New York Times article, reporter James Traub notes that UW SOUL offers ammunition to critics of such testing—that learning is mediated by the major, so attempts to measure broad competencies are futile.

“Students learn in far more complex ways than any standardized test could capture,” says Beyer. “There’s no such thing as general education,” adds fellow researcher Gerald Gillmore. “We have many undergraduate educations filtered through particular disciplines.”

After graduating from the UW, Flores, now 26, obtained a master’s degree in teaching from City University in Bellevue and now instructs fourth graders in the Federal Way School District. ”As a freshman, I was very naive,” he says. “I just wish I had gone into geography and teaching sooner.”

Rochelle, also 26, graduated in 2003, and eventually worked for a California nonprofit that helps low-income people secure permanent housing. She found herself using the same research skills she’d learned as a history major. This past fall she began work at New York University toward a master’s degree in public administration.

Schrager, 24, continues with the UW Chamber Dance Company and is preparing another performance art piece. In May, about the time “Getting Undressed” played at the Ethnic Cultural Theater, Schrager was named one of four College of Arts & Sciences Dean’s Medalists.

Eaton, now 20, expects to graduate next June with a mas­ter’s degree in statistics, bachelor’s degrees in math and sociology, and a minor in music. Unusual, yes, but more and more UW students are completing multiple degrees, often because they arrive with significant Advanced Placement credits and/or change majors.

“The whole hugeness of the transformation is what im­pressed me,” Beyer says of her four-year conversation with students. Some take longer to find their groove; they become “loitering students.” A growing number are taking five or six years to graduate instead of the usual four.

But that may be OK. Education is a journey, not a race, and some students need to travel several roads before finding the one that’s right for them.

This past March, UW researchers Catharine Hoffman Beyer, Gerald M. Gillmore and Andrew T. Fisher published Inside the Undergraduate Experience (Jossey-Bass/Anker, $40). The book grew out of UW SOUL, their four-year study of 304 undergraduates at the University of Washington. Some key findings:

Catherine O'Donnell is a writer for UW News and Information. She lives in Seattle.