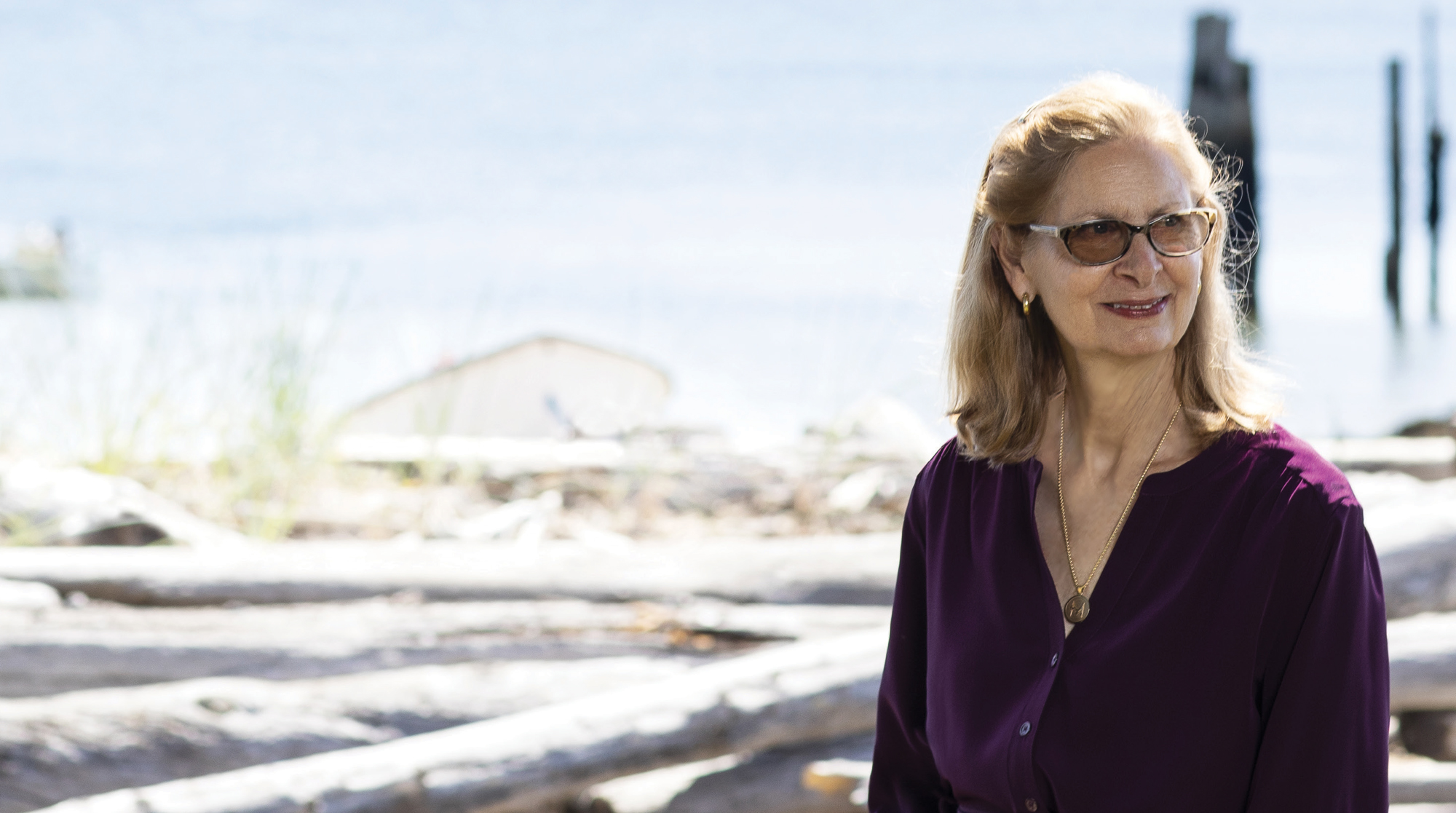 Joanne Montgomery, recipient of the 2022 Gates Volunteer Service Award, spent two decades as a nurse—and two more ensuring that the UW is at the forefront of the field.

When she decided to take a step back from her nursing career, Joanne Montgomery, ’77, didn’t slow down. In the late 1990s, after more than 20 years as a critical-care nurse, she began a new chapter as a volunteer and advocate for the profession. She’s now spent 20 more years (and counting) as a philanthropic leader at the University of Washington, raising money and support to bolster the UW and especially the School of Nursing.

Nursing has been part of Montgomery’s life since she was a teenage candy-striper, volunteering at the hospital near her Normandy Park home and dreaming of studying nursing at the UW. Forty-five years after achieving that dream, Montgomery has made an enduring mark at her alma mater. She and her husband, Bruce, have given generously across the University for more than three decades, providing crucial resources to the School of Nursing, UW Medicine, the Department of Chemistry, UW Athletics and beyond.

Joanne Montgomery’s volunteer leadership has helped guide the UW in its role as one of the country’s preeminent public universities. And her persistent advocacy has helped the School of Nursing, also one of the best in the country, to grow even stronger.

In recognition of Montgomery’s selfless volunteerism, inspiring philanthropy and ongoing impact, the University of Washington Foundation has honored her with the 2022 Gates Volunteer Service Award, presented annually to those who have taken the University to new heights—and encouraged many others to do the same.

Joanne met Bruce Montgomery, ’75, ’79, while studying for mid-terms in the 24-hour Health Sciences Library. Their first date was a coffee break, and then they went back to studying— Joanne, to be a nurse, and Bruce, to be a doctor. After they graduated, their careers would take them across the country and  back; they returned to Seattle in 1994. Joanne held several challenging and rewarding nursing positions throughout those years: working in surgical ICU overflow trauma at Harborview in Seattle; caring for AIDS patients at the San Francisco Veterans Affairs (VA) hospital in the terrifying early days of that epidemic; and serving at another VA hospital in New York.

Finally, after working as a surgical recovery nurse back in Seattle at Swedish Hospital, Montgomery made the difficult decision to step back from nursing practice. Bruce’s biotech career had taken off—he co-invented and led development teams for one of the first AIDS drugs and two new cystic fibrosis therapies—and Joanne devoted her time and care to raising the couple’s two young boys.

But while she was no longer a practicing nurse, Montgomery still maintained a strong connection to the profession. And a new chapter began. “That’s when I launched my volunteer career,” she says.

Montgomery’s career of UW service began on the Dean’s Advisory Board at the School of Nursing, a role she held for 20 years, helping bring top nursing students and faculty to the University and further broadening its impact. In 2021, Joanne became an emeritus member of the Advisory Board.

Montgomery co-chaired the school’s Be Boundless campaign, which raised more than $42 million for the future of the school. Azita Emami, executive dean of the School of Nursing, says Montgomery’s leadership during this time is a landmark effort with tremendous long-term impact—enabling the school’s ambitious plans for the future: “plans that will benefit rural as well as urban areas of the state, while extending the School of Nursing’s health-care leadership and contributing to the University’s legacy of community service.”

For more than 20 years, Montgomery has also been involved with the Seattle chapter of the ARCS (Achievement Rewards for College Scientists) Foundation, which partners with the UW and Washington State University to fund doctoral students in STEM disciplines. She loved supporting graduate students and helping attract the very best to the state and the UW, but something was missing: Nursing graduate students weren’t eligible for ARCS support.

“For some reason, people think nursing is a soft science,” says Montgomery. “It’s not. It’s a hard science.” With unwavering conviction, she helped lobby the national ARCS organization to allow the Seattle chapter to offer nursing fellowships—and in 2006 it became the first chapter in the nation to do so. “These fellowship opportunities,” Emami notes, “have played a crucial role in our ability to recruit top-tier graduate nursing students from diverse communities nationwide.”

The Montgomerys immediately led by example, establishing an ARCS fellowship in nursing (in addition to a second in honor of the American Lung Association). Their generosity inspired four other named ARCS endowments that support the School of Nursing.

Beyond ARCS, the Montgomerys have created endowed professorships in nursing and chemistry, a fellowship for doctoral nursing students, and a chair in pulmonary and critical care, and they’ve given generously to support programs and initiatives across the University.

Leading at the highest level

For more than a decade, Joanne matched this cross-university philanthropy with cross-university leadership on the UW Foundation Board, which cultivates meaningful financial support for the UW’s mission. She has held multiple roles as a director, helping propel the whole University forward—and is as dedicated as ever to bringing the School of Nursing to the forefront.

“A big passion for me was educating others about what nursing is and what it does, because there is a lot of misconception out there,” she says. She spearheaded a nursing “Dawg tank,” where distinguished nurse researchers pitched their innovative, life-changing research ideas to a panel of potential funders.

Whether Montgomery is helping promote UW Nurse Camp (which increases access and opportunities in nursing for high school students from underrepresented, underserved communities), supporting and encouraging graduate students, or helping attract and retain leading faculty in the School of Nursing, she is not only working to shape the future of this vital field—she’s ensuring that that future is being forged here at the UW.

For Montgomery, the most meaningful part of all her work isn’t attracting outstanding students to the UW. It’s watching what they’ll do next.

“It means everything to me,” she says. “What graduates will go on to accomplish. All the impact they’ll have.”