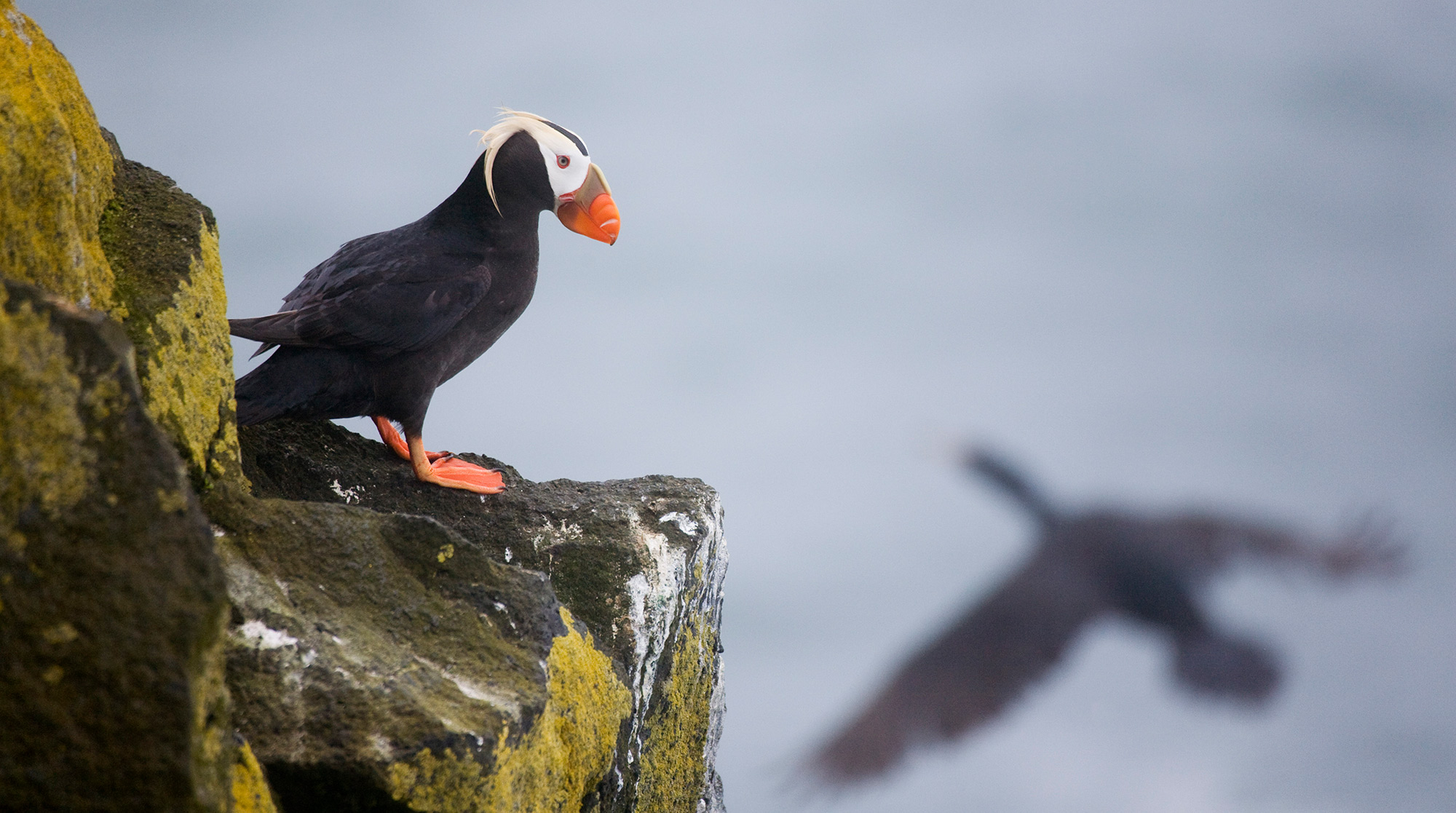 When Julia Parrish and her team received word that tufted puffins were washing up on the shores of a remote Alaskan island in the Bering Sea in 2016, they knew the numbers of dead and dying birds were unprecedented—but they didn’t know why.

Was this a disease? A toxin? The dead birds were appearing at 400 times the normal rate. In many cases, sick birds flailed in the waves, too weak to stand, dive or fly. Whatever was causing the mass die-off could be a danger to people and other animals.

“You start out knowing nothing and you have to figure it out,” says Parrish, head of the UW’s Coastal Observation and Seabird Survey Team, or COASST.

The team relied on employees of the Aleut Community of St. Paul Island Ecosystem Conservation Office to gather the birds and send data back to Seattle. The island sentinels, as they are known, drove all-terrain vehicles outfitted with collection baskets and plucked bird carcasses from the shore, racing against giant waves crashing onto the freezing beaches.

Since 2006, COASST has been working with the conservation office and the native Aleut community on St. Paul as part of a beached-bird, citizen science data-collection program. Every month, 800 people throughout the North Pacific coast from Alaska to Northern California comb their beaches and send information to COASST about beached birds.

Tufted puffins are small but scrappy seabirds with long plumes of golden feathers that they toss around—like someone in a shampoo commercial—when trying to attract a mate. “They look and act to me like a cross between a drum major and some sort of clown,” Parrish says. During the winter, they migrate to the North Pacific Ocean in search of food.

The system was changing in a way that made the top of the food chain run out of gas.

On St. Paul in 2016, the island sentinel volunteers gathered some 350 emaciated bird carcasses. Laboratory analyses revealed the birds had very little body fat and significantly diminished flight muscles. Between 8,000 and 13,000 birds likely died, according to COASST’s models for estimating mortality.

Lab results also found traces of blood in the birds’ digestive tracts—a sign of starvation. Disease and toxins could be ruled out. The birds died because they couldn’t find the nutrient-rich fish they rely on to survive Alaskan winters. The die-off pointed to a larger-scale, longer-term problem with the food supply caused by warming seas.

COASST reached this conclusion, which was published in May in the scientific journal PLOS ONE, based on the data the group had collected about St. Paul’s puffins along with other scientists’ findings about rising ocean temperatures and the availability of small prey fish in the Bering Sea. In 2015, Nick Bond, UW professor of atmospheric sciences and Washington state’s climatologist, coined the term “the blob” to describe a warmer-than-normal patch of water in the northeastern Pacific Ocean. Water entering the Bering Sea from the blob to the south combined with melting Arctic Sea ice to the north made for water temperatures that had become less hospitable up the food chain, from plankton to forage fish and seabirds.

“The system was changing in a way that made the top of the food chain run out of gas,” Parrish says. The impact of warming seas does not end with tufted puffins, she adds. If puffins can’t find their food sources, other seabirds and salmon, which depend on the same size fish, will also struggle.