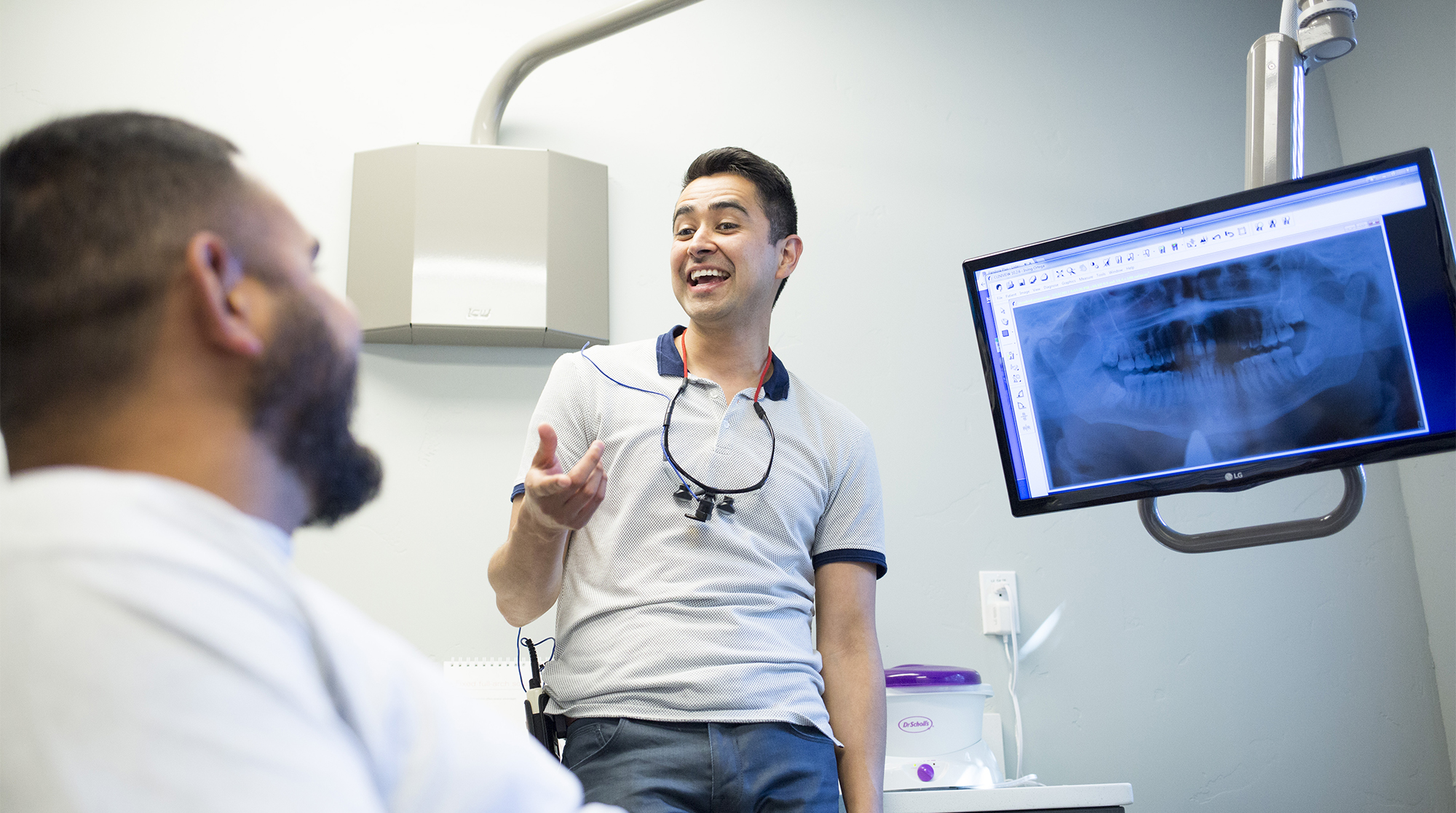 ‘We came here to contribute’

A language barrier. Money struggles. Fillings without anesthetics. As an undocumented immigrant, Antonio Lopez-Ibarra dreaded going to the dentist as a child. Now he's a dentist who goes the extra mile to put his patients at ease.

Inside the lobby of Tri City Dental Care, one of Kennewick’s newest dental clinics, soft piano music floats through the air and sunlight streams through spacious windows. The walls are a peaceful shade of pastel blue, and there’s a dispenser of fruit-infused water for patients who crave a hint of sweetness, even when they’re at the dentist.

It’s a calming place, one designed to comfort people who are feeling bad—like the man who just walked in.

He’s in pain. Earlier in the day it was massive pain, the 10-out-of-10 kind. An assistant ushers him to a patient room, where it doesn’t take long for the dentist, Dr. Antonio Lopez-Ibarra, to diagnose the problem: A wisdom tooth has overstayed its welcome. Now it’s infected.

As Lopez-Ibarra numbs the mouth and sets out to remove the tooth, the patient picks up a remote control, aims it at the flat-screen TV hanging nearby and turns on Pandora Radio, which cues up a list of chart-topping songs. If there was more time (and less pain), he could even slide on a pair of Beats by Dre headphones, turn on a Netflix show and tinker with the massage settings on his chair. That’s because he’s at a dental spa, one that caters to the mind as much as the mouth. Dr. Antonio Lopez-Ibarra points out an infected wisdom tooth on an X-ray.

But he isn’t in the chair very long. The procedure, which can take up to 40 minutes, finishes in 15. The tooth-pulling part was over in a matter of seconds.

Lopez-Ibarra, ’14, is in a polo shirt and jeans. If not for the surgical mask, you wouldn’t know he was a dentist. “This is just the way I am,” the 31-year-old says about his attire. “The job is challenging, so to keep grounded, I try and keep it casual.”

Tri City Dental Care opened in March, and while dental spas have been around since the 1990s, the trend hasn’t caught on in the Tri-Cities area yet. Lopez-Ibarra says only one other clinic in the area bills itself as a dental spa, though others may offer things like neck pillows and in-chair entertainment.

At his clinic, patients enjoy privacy in their rooms thanks to wooden barn doors that slide closed. In addition to music and in-chair massages, they’re treated to lavender aromatherapy and hand waxes, at no extra charge.

For Lopez-Ibarra, who was born in Mexico, the amenities are not a gimmick. They’re central to his approach to care: Patients should feel comfortable, at ease, and never afraid.

He can relate to the fear. As a child, he experienced dental pain—the 10-out-of-10 kind. When his family couldn’t afford care in the U.S, he got fillings done on a family trip to rural Mexico. They were good fillings, he says, and they lasted a long time. But they were done without any numbing. “The dentist didn’t have anesthetics,” he says. “I don’t want people to feel that anymore. I want to make sure my patients are always comfortable.”

Another amenity: Everyone who works at the clinic speaks Spanish. Lopez-Ibarra and his family spoke minimal English when they came to the U.S., so they had trouble communicating with a dentist, even with a translator. That language barrier magnified their pain and fear.

About 70 percent of Tri City Dental’s patients are Latino, and many of them prefer to speak Spanish. It’s not uncommon for them to play traditional Mexican music on the speakers during their appointments.

“It’s a comfortable feeling for them. We joke around. It feels like they’re part of the clinic,” Lopez-Ibarra says. “They can be open with me and tell me everything they feel, without having to be judged.” Enrique Calderon, a patient at Tri City Dental Care, listens to music while getting his teeth cleaned.

In Mexico, Lopez-Ibarra’s father was the leader of a teachers’ union. He left that career to bring his family to the U.S. on a work visa in 1989. He had studied physical and chemical engineering back home, but in Quincy, Washington, he harvested onions, picked apples and herded cows.

The visa expired, but the family stayed anyway. America felt like home, especially for Lopez-Ibarra, who was only 4 years old when he moved to Washington. “I remember being very, very scared for the future of our family,” he says. “We didn’t know where we were going to go, where we were going to end up. At any moment, our dream could be crushed.”

After a few years, the family stepped out of the shadows, thanks to the support of their church. Lopez-Ibarra’s father got his green card, eventually became a naturalized citizen, and started a job as a public schoolteacher in Yakima. He’s now retired and runs his own movie-theater cleaning business.

“I know some people don’t want to say they are an immigrant. But for me, I’m really proud of that. I love to be able to share our story, especially for my parents.”

Starting a business has become a family tradition. Lopez-Ibarra has a brother who’s also a dentist, and another who is a chiropractor. They both started their own practices. His two other brothers founded a large floor-care company and a concrete polishing business.

“We came here to contribute,” Lopez-Ibarra says. “People who come to this country come here to try to make a difference. They don’t come here to cause problems.”

Lopez-Ibarra started as an economics major before realizing he wanted to be a dentist. So he knocked out the pre-reqs, aced the aptitude tests and earned a spot in the School of Dentistry without finishing his bachelor’s degree. It’s a rare path available to only a few students each year, says Beatrice Gandara, a clinical associate professor of oral medicine.

Gandara helped set up the UW chapter of the Hispanic Student Dental Association (HSDA). Lopez-Ibarra joined the group and became president in his final year. “It isn’t only about being Hispanic,” Gandara says of the HSDA, “it’s about serving the Hispanic community.” Tools are carefully organized on a sterilized table at Tri City Dental Care in Kennewick, Washington.

Several times a year, the group brings mobile clinics to migrant farm workers in Mount Vernon, treating patients in the back of vans provided by Medical Teams International. People who don’t have dental insurance through their jobs—like migrant workers—have little choice but to wait until an emergency strikes, Gandara says. Preventative care usually isn’t an option.

In the early days of the HSDA, Gandara remembers seeing Lopez-Ibarra at virtually every event, often shoulder to shoulder with classmate Luis Acevedo Rodriguez, who now provides care to low-income patients at a community clinic in Monroe.

“They represent their communities well and they come from humble beginnings,” Gandara says. “They’re both doing very well in different areas.” The “Ibarra” in Lopez-Ibarra’s last name is his mother’s maiden name. “I have a lot of family down in Mexico, and they’re like, ‘We want to be included in your family’s success that you have other there.’ So I included them that way.”

There are 14 chapters of the Hispanic Dental Association for practicing dentists, and two of them are in Washington. Acevedo Rodriguez now sits on the leadership board of the Western Washington chapter, and Gandara expects Lopez-Ibarra to eventually move into a leadership role in Eastern Washington.

Lopez-Ibarra graduated from UW in 2014. Before branching out on his own, he spent two years at West Pasco Family Dental, a 15-minute drive across the Columbia River. There, he worked alongside Dr. Greg Frodel, ’81.

Tri City Dental is humble in size—one dentist and three patient rooms—but it is decked out in the latest technology: an infrared cavity camera, a wireless X-ray machine, electric drills that barely make a sound. And Lopez-Ibarra isn’t always in a polo shirt and jeans. Some days he dresses the part: a lab coat with a button-up shirt and a necktie, like a smiling dentist in a stock photo.

His favorite tie has green and white stripes with a red pyramid stitched at the bottom, representing one of the ancient pyramids of Teotihuacan in Mexico. He designed it with his nephew. “We wanted to stand out and say, ‘Hey, it’s OK to embrace where you’re from.” They created a collection of ties for other cultures and countries, and started a business to sell them.

The neckties, which are now sold in a handful of major airports, speak to the entrepreneurial spirit of Lopez-Ibarra and his family. They are seven people who have started seven businesses, and despite their impressive success, they continue to add new chapters to their only-in-America story, the kind of story that immigrants come to America to write.

At 31 years old, Lopez-Ibarra surely has more chapters to author. Because like so many before him, he came here to contribute.