When people arrive at the UW by rail, it won’t be the first time

The year is 2016—or 1895. A group of students, dressed in the fashions of their respective times, gathers at the station near the UW to catch a ride into downtown Seattle.  They joke with their friends, enjoy a snack while they wait, and discuss concerns about upcoming exams. But as their vehicles approach, the difference between the crowded confusion of the trolley of 1895 and the quiet comfort of the yet-to-be-seen Sound Transit light rail becomes a clear indication of the passage of over 120 years.

Electric streetcar service was extended to the University District area—then known as Brooklyn—in 1892, when David Denny built the Latona Bridge over Lake Union. When the UW moved its campus from its downtown location to the same neighborhood in 1895, there were no dorms, sororities or fraternities near campus. Most students and faculty had to commute to campus via the trolley. The UW built an open shed located about a block away from campus, at what is now 42nd Street and the “Ave.,” in which commuters could wait for their streetcars. This shed became known as University Station, and was quite a local landmark. Before long, the entire neighborhood was referred to as such, and for years, the UW stationery even listed its location as “University Station, Seattle.”

Although the electric streetcars were a welcome innovation in the city after they began replacing horse-drawn cars in 1889, a ride in the trolley was far from relaxing. It was loud, bumpy and crowded. Students would often be left without seats, and when standing room was limited, some would ride on the roof or on the trolley-rope. An editorial in the October 1895 issue of the Pacific Wave—the student publication that was the predecessor of The Daily—complained, “When 85 people are crowded into a single car … something unpleasant is very apt to occur.” Sometimes the effects of a rough ride could be felt even after the trolley had stopped. Another student commented that “a ride in one of these cars is worse than a day’s work in the gym.” 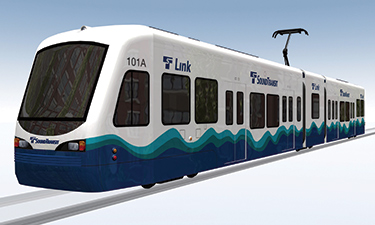 The projected light rail cars will be roomy, air-conditioned and comfortable.

Fast forward to the future. If all goes as planned, by 2016 UW students and faculty, as well as thousands of others, will ride in a different brand of electric car and wait in a new kind of station with all the comfort the 1895 versions lacked. The new station, known as the University of Washington Station, will be adjacent to Husky Stadium and feature two to three entrances with plazas, electronic ticketing machines and covered bicycle storage. There will be elevators and escalators, as well as stairs leading to the platform about 110 feet underground.

Unlike the cramped and crowded trolleys of 1895, these electric cars will be roomy, air-conditioned, and have metal bridgeplates that will slide out for wheelchair and stroller access. And don’t expect to see students riding on the roof for lack of seating; Sound Transit will be prepared for an estimated 25,000 riders daily at the University of Washington Station by 2030.

Currently, Sound Transit is seeking a federal grant for $750 million to build the University Link, a project that will cost a total of $1.5 billion. According to Sound Transit, the project is the highest-rated nationwide in the competitive funding process. There is also a proposal to extend the light rail farther north than Husky Stadium, which will go before voters in November 2007. That transit package would include a station located near the UW Tower (formerly the Safeco Tower), just a few blocks away from the original open shed that marked University Station in 1895.