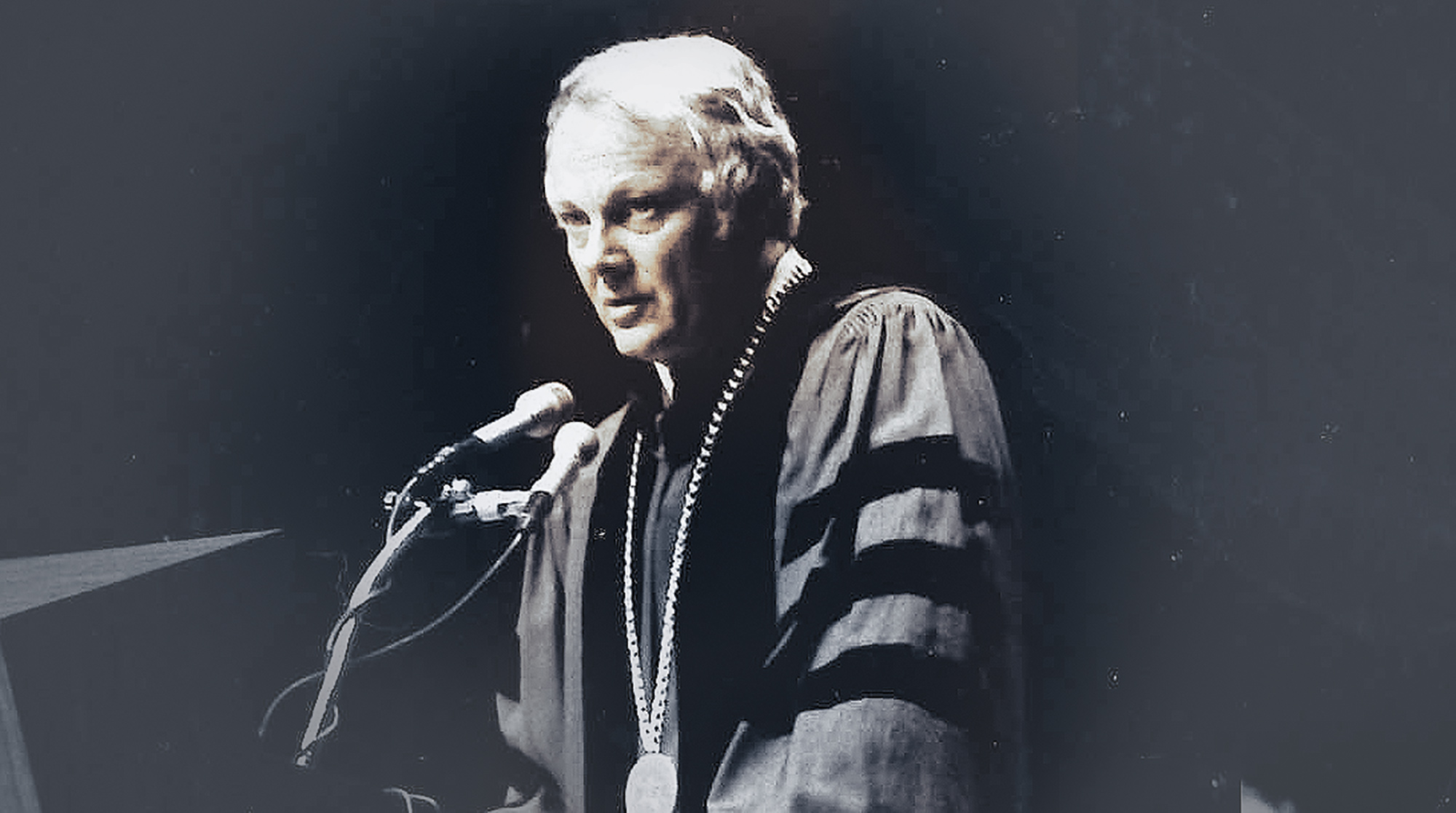 William Gerberding left his mark on the UW

Baseball, music, politics, dining at greasy spoons—those were just a few of the things William Gerberding loved. And though the longest-serving president in UW history (from 1979 to 1995) is no longer with us—the North Dakota native died Dec. 27 at the age of 85 after suffering a stroke—his imprint on the University is indelible.

Given his deep love of classical music, it made perfect sense that Gerberding chose the grand theater of Meany Hall as the setting for his funeral on Jan. 14. He selected the romantic composer Felix Mendelssohn’s moving Song Without Words for the service, which was attended by scores of people whose lives he touched.

During his 16 years as UW president, Gerberding (or The Gerb, as he was called) was known for his keen wit, probing intellect and unassuming personality. Almost always nattily attired in a suit, he never hesitated to fight for what he believed in, even if it ruffled feathers. For all of his accomplishments at the UW, Gerberding was first and foremost a husband and family man. Patti Payne, columnist for the Puget Sound Business Journal, had many occasions to speak with the UW leader.

“What stands out most in my mind is his relationship with his beloved wife and partner, Ruth,” Payne recalled in a recent column. “The two seemed inseparable. I would see them sitting on steps at Benaroya Hall together, or talking animatedly to each other during intermissions. They had such fun together and were so much a part of each other.” Gerberding met his wife at Macalester College in St. Paul, Minnesota, where they studied as undergraduates and he saw Ruth singing in the choir.

Gerberding’s daughter, Liza, of Los Angeles, says having him as a father “was like having a professor around all the time with whom you could consult about everything from language to world politics.” His son, John, the only of the four Gerberding children to live in Seattle, says even when his father was extremely busy, he was never stressed or short-tempered with him. “He was always present for me, particularly later in life. He was a great mentor and was there for me in the bad times as well as the good times.”

One of Gerberding’s big heartaches struck in the 1980s, when financial crises caused the state legislature to slash the UW’s funding. So Gerberding decided to take action. He oversaw the UW’s first major fundraising effort, The Campaign for Washington, which raised $284 million. That enabled the UW to recruit and retain top faculty, prevent further program cuts and provide funds for new buildings, especially in the sciences. During that time of austerity, he enhanced the UW’s national profile. Although Gerberding had the refined temperament of a scholar, he was a powerful salesman for what he believed in, whether it was the University or the Seattle Opera. Speight Jenkins, former opera general director, recalls: “When I met with community leaders, he would go with me. In every area of my work, he was a wise and generous counselor.” 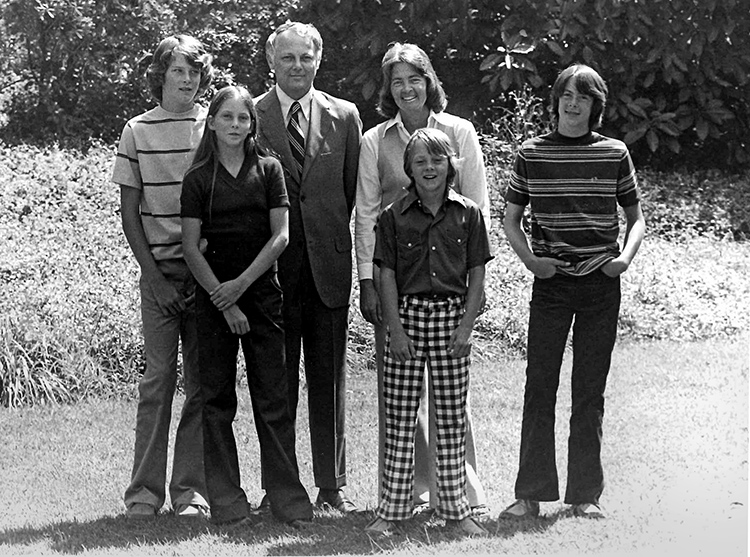 William and Ruth Gerberding are flanked by their children (left to right) Steve, Liza, John, and David.

After Gerberding retired from the UW, he and Ruth moved downtown not too far from the Seattle Symphony’s Benaroya Hall. Ted Van Dyk, a longtime Seattle journalist who knew Gerberding, wrote about him on Crosscut.com after his death. He said Gerberding’s favorite lunch venues were the marginal places along First Avenue. One Crosscut.com reader said she met Gerberding for lunch where he opined on the quality of Al Jazeera newscasts. She went on to say that Gerberding “touched the people of Seattle, not only in the large scope of his work here, but also in the tiny ways of connecting to his immediate community.”

Hubert Locke, professor emeritus and former dean of the Evans School of Public Affairs, says Gerberding had a solid understanding of what a good university is all about. “He had an eye for institutional quality and he went about his work in a fashion that permitted the institution itself to come into full flower,” he explains. “The UW was a good regional university but nothing of outstanding note on the national scene. That began to change under Charles Odegaard but changed rapidly and assertively under Bill Gerberding.”

Perhaps William Gerberding’s greatest gift to the community was his ability to link our collective future to that of the University of Washington: The UW impact on individuals, on our region, and on the world is profound—whether we are launching young people into a boundless future or confronting the grand challenges of our time through undaunted research and scholarship. That is the vision Gerberding helped create, a vision that lives on today. ­