Windermere Cup brings magic to Montlake every May

It was May 1986 and veteran columnist Blaine Newnham quoted UW coaches as saying that nothing in the world compared to their crew teams’ Opening Day, which had been held in conjunction with the ceremonial first day of Seattle’s boating season since 1970. Thousands of boats and spectators lined the course. The Montlake Cut provided a natural amphitheater. And Husky teams ranked among the nation’s best. “The stage is set in Seattle,” Newnham wrote in The Seattle Times, “why not use it?” 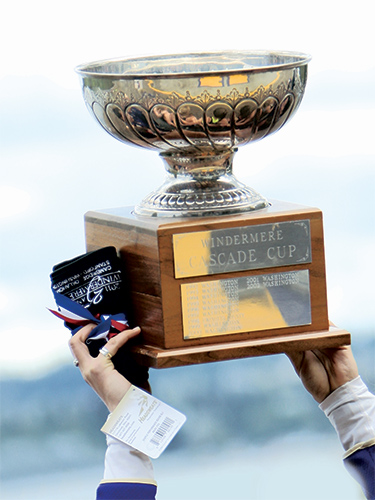 The next day, John Jacobi, founder of Windermere Real Estate, went to men’s coach Dick Erickson and women’s coach Bob Ernst with a proposition. “Let’s get the best team in the world here,” he said, offering to be the title sponsor. “Who’s the best team in the world?” Both Soviet squads had just won the world championships. But the Cold War was ongoing. The Berlin Wall was still years away from coming down.

Once a deal was struck, the Secret Service were all over the UW campus and Jacobi’s home. As the Soviets practiced in the days leading up to the race, armed police officers remained stationed nearby. But that first Windermere Cup created the rich, unmatched tradition Newnham and the Huskies had hoped for—and an unforgettable Seattle moment.

When the race was finished—won handily by the world-champion Soviets—the Husky men’s shell pulled alongside the Russians and, in the shadow of a Coast Guard cruiser, traded their rain- and sweat-soaked shirts. Four of the members changed boats, and as they rowed through the Montlake Cut, fans flashed peace signs. “It was one of the greatest moments of my life,” UW junior Sarah Watson told Newnham as she stood on the dock in shoes gifted from a Russian who also had given up her seat. “I’ll never forget it.” 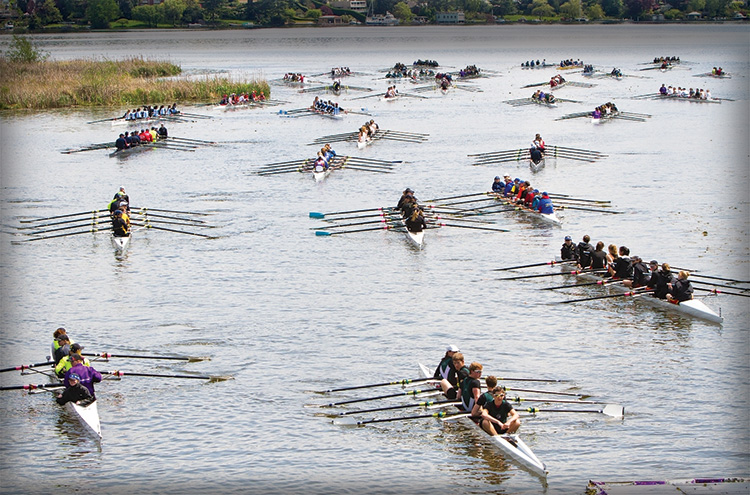 Every year, Huskies say the Windermere Cup creates a greatest moment for someone: a student athlete, a coach, alum, a band member, or family members watching with sack lunches along the cut. Next to that inaugural event in 1987, one of Ernst’s favorites was the men’s 1997 win against the Australian national crew—which had five gold medals between them. Current men’s coach Michael Callahan, whose Huskies had a perfect season last year to repeat as national champions, recalls being a student athlete standing on the Conibear Shellhouse balcony to scout his Windermere Cup competitors in the 1990s.

John Buller, ’71, former UW Alumni Association president and current Seafair chair, remembers years before the Windermere Cup when the Opening Day crew races would be held on the same day as the football spring game and crowds of roughly 25,000 would gather. There also was the hot May afternoon in the early 90s when there was the impromptu water balloon fight among boats that felt much like the Seafair fun of late summer.

Sue Williams, ’73, who went with her Husky parents as a child to watch crew races, loves how the UW band now starts the day by serenading fans outside the Seattle Yacht Club. When she served as the UW Alumni Association President, Williams rode in a boat with band director Brad McDavid, followed by the three yachts carrying the UW band.

“They’re doing “Tequila” and the Husky fight song, and you’re going through the cut and everybody’s cheering,” she recalled. “It was one of the biggest thrills.” 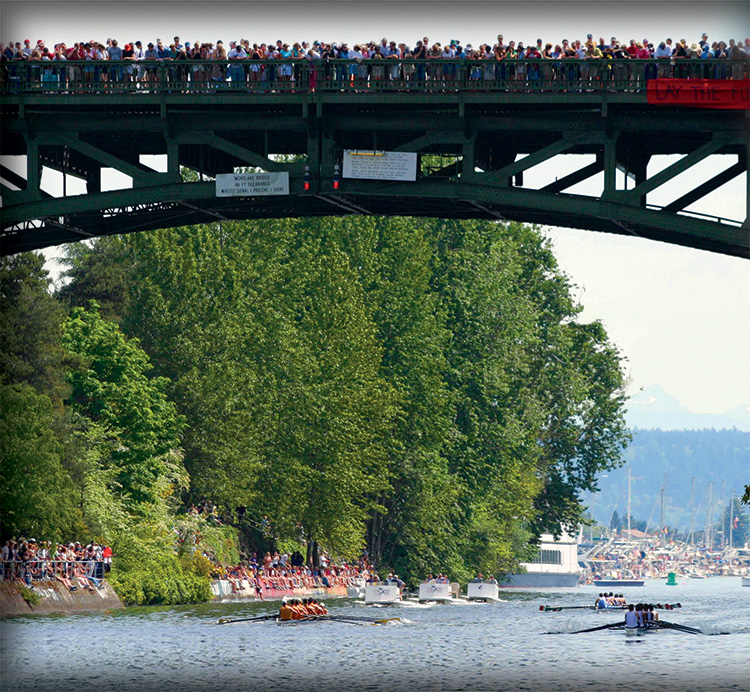 The timelessness of the tradition is now enhanced during the day’s first race by the presence of crews from the Ancient Mariners Rowing Club—a group featuring athletes whose college days began during the Eisenhower administration. And still, like the guys half a century younger, they have the same camaraderie and work ethic, braving the cold rain in early morning practices. No wonder the experience leaves some visitors thinking that the UW is too good to depart.

In 2001, six of the Romanian women’s crew jumped ship after the Windermere Cup, defecting for a better life in Seattle. Two of the young women joined the UW team and one, Sanda Hangan, ’07, was named Pac-10 Newcomer of the Year. The promise of a top-quality education and an association with a top-quality rowing program was what motivated her move, Hangan told reporters the following year.

It wasn’t the first time a foreigner was swayed by the Windermere Cup. Roberto Blanda left the Italian national team to join the Huskies from 1992-95, though he went back home before enrolling at Washington and later competed for Italy in the Olympics.

As the Windermere Cup heads into its 27th edition, the results have become more predictable. The Husky men’s varsity eight have won 20 of the 26 Windermere Cups, with the only exceptions since 1990 being the 2006 win by the Russian national team and Croatia’s Olympic squad victory in 2001. The UW women have won 18, including the last six. Last year, University of Virginia men’s coach Frank Biller told a reporter his team was looking forward to testing their championship lineup at the Windermere Cup, “to see how much we get our butts kicked by the U Dub.”

No matter who wins, starting that two-kilometer course among all those party boats and yachts, then going through the Montlake Cut with thousands of screaming fans is a life-changing experience, just like it was for the Soviets in the 1987 Windermere Cup.

“I never heard a single word of the coxswain during the race,” reigning world champion Andrej Vasiljev told Newnham that day. “Even the finals of the World Championships are not as impressive as this.”

Casey McNerthney is a journalist at seattlepi.com.