Like an aging star of the stage, the Showboat Theatre took its final bow April 6 as wrecking crews dismantled the 56-year-old dowager on the UW’s Portage Bay waterfront.

The Showboat was not a pretty sight at the end of her life. Wood siding rotted and paint peeled. Inside, there were asbestos problems, lead paint, water leaks and an antique electrical system that prompted the School of Drama to shut it down in 1984.

While the name said Showboat, like so much of the world of the theater, its setting was pure artifice. It never floated and could never float. The theater was built on pilings set in the water.

For almost 10 years the University and a group of drama alumni, the Showboat Foundation, tried to save her. The cost of restoring the building—estimated at $1 million in 1984—far exceeded the cost of removing or demolishing the structure. To move it, the structure would have to be dismantled and barged to another site. Over the years the foundation considered several locations and had a temporary site in Kenmore ready. 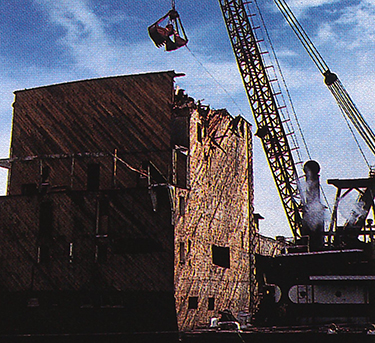 A steam barge dismantled the theater on April 6. Photo by David M. Opincarne.

But when the bids came in, the cost of demolition was more than $200,000 lower than the cost of moving it to Kenmore. State law required the University to accept the lowest bid, and the fate of the Showboat was sealed.

Built by the Works Progress Administration in 1938, the Showboat opened in September of that year with a production of “Charley’s Aunt.” For many years it was the center of Seattle’s nascent theatrical community.

In its prime, the Showboat’s interior was a mix of Mississippi riverboat glitz and a classic, “jewelbox” theater. Memorable productions included Michael Farrell’s staging of “The Little Foxes,” Donal Harrington’s “A Midsummernight’s Dream” and Robert Loper’s version of “Peer Gynt.” In 1946, Drama School Director Glenn Hughes enticed Lillian Gish to perform there as the star of “Mrs. Carlyle,” a historical drama he wrote about the wife of British historian Thomas Carlyle.

On its stage stood many of the UW School of Drama’s most famous alumni: Frances Farmer, Ella Raines, Robert Culp, Chet Huntley and Kyle Maclachlan. One of its most famous inhabitants may have been there at the end, since several drama professors and students claim to have seen or heard the ghost of Glenn Hughes over the years.

Designed by Hughes and the late Drama Professor John Conway, the Showboat was originally conceived as a true floating theater that could be towed to different sites in Seattle for performances. But the two found that fluctuating water levels made that plan impractical.

Asked in 1985 how he felt about the theater’s impending doom, Conway responded, “Well, I designed it to last 25 years. Every year after that was borrowed time. It’s like, that’s life.”