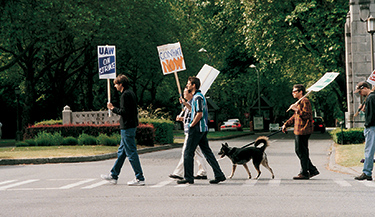 Citing a stalemate in contract negotiations, the teaching assistants union at the University of Washington went on strike June 1, the last day of classes for Spring Quarter, and continued its walkout until the official end of the quarter on June 15.

This is the first time in UW history that TAs have gone on strike. Picket lines went up at major campus entrances and noontime rallies were a daily occurrence.

According to University payroll records, 235 of the 1,322 TAs working Spring Quarter took leave without pay for the period of the strike. The TA union disagrees. “A clear majority of the TAs were on strike,” says union spokesperson Kristen Intemann. Clerical errors or department policy may have kept striking TAs on the payroll, she says.

In May, the state attorney general’s office said that the UW has no legal authority to grant exclusive rights. “The University presently does not have the legal authority to recognize an exclusive bargaining representative for purposes of collective bargaining with TAs, readers, graders and tutors. The Legislature has not granted the University authority,” Attorney General Christine Gregoire said in a letter to President Richard L. McCormick. A bill to authorize the UW to negotiate exclusive rights with the union died in the Legislature during its 2001 session.

Union officials discounted the attorney general’s opinion and said the University could recognize exclusivity without legislation. “There is no law that precludes the University from voluntarily recognizing the union as the sole agent,” says Intemann.

There are about 30 universities with TA unions in the United States. All the University of California campuses have TA unions, as do both Oregon and Oregon State universities. All states that currently have TA unions have enabling legislation that guides the labor-management relationship and gives the university the authority to enter into an exclusive arrangement. At Washington, the two sides had been negotiating most of the school year and averted a strike last December. A memorandum of understanding between the union and the UW expired May 28 and the union walked out three days later.

“It was absolutely a successful strike,” says Intemann, a philosophy TA. “There was a major disruption to the UW. Thousands of classes and sections were canceled.”

Karen Kavanagh disagrees. The UW’s human resources vice president says, “Any kind of work action is disruptive. Did they succeed in closing down the University? No. I would say there was no overwhelming impact.”

According to payroll records, strike activity centered in the humanities and social sciences. While 66 of about 90 English TAs took part in the strike, only nine TAs walked out at the College of Engineering, which has close to 200 teaching assistants.

Final exams in some undergraduate courses were affected, as were some grades. UW Registrar W.W. “Tim” Washburn says that there were about 3,000 missing grades that should have been reported by the end of June. Normally faculty give out about 80,000 grades each quarter.

The UW is ready to resume negotiations, says Kavanagh. “We want labor peace; we don’t want labor disruption,” she says. “In our negotiations we came to a substantial portion of agreement on about 10 articles. But exclusive bargaining rights was the main sticking point.”

The union also says it is willing to talk, although no new negotiations had taken place when Columns went to press in early August.

“We are committed to continuing to negotiate with the University,” says Intemann. “But if this isn’t resolved, there will be an even greater disruption to the University in the fall.” While she would not say definitively if the union would strike again, she said the union leadership is discussing “various options.”