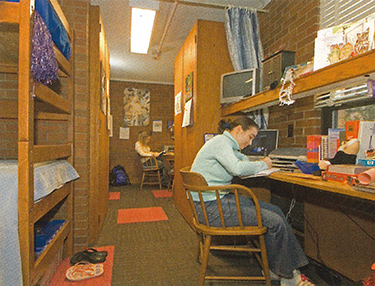 Mercer Hall would be demolished under the upgrade plan.

UW students may soon say goodbye to communal bathrooms and too-cramped triple rooms in the residence halls. On March 20, the UW Board of Regents approved a 2 percent annual residence hall rate increase beginning this fall to fund renovations for the existing halls. The rate increase would also aid the construction of three new residence halls and two apartment complexes, each up to six stories tall.

The renovation plan aims to ease overcrowding, eliminate communal bathrooms and give a much-needed facelift to the mid-century residence halls. The UW currently houses about 5,100 students in space designed for 4,500, mostly by using double rooms as triples. The expansion would result in a net gain of about 2,365 beds.

The only existing hall that would not be upgraded is Mercer Hall. The plan calls for the unpopular four-story hall to be demolished to make room for new apartments. Three new residence halls and additional apartments would also be located in the southwest area of campus near Terry-Lander, according to the plan.

Eric Godfrey, the UW’s vice provost for student life, hopes the new and improved housing options will encourage more students to live on campus and be more engaged with the University.

“We’ll take great care to build facilities that are more community-orientated, apartment-like and more attractive to students at all levels, meaning not only underclassmen but upper-division students as well,” Godfrey says.

Another goal is to make the southwest part of campus a more desirable place for students to live, according to Rob Lubin, assistant director of facilities op­erations at the UW He says the new residence halls could include workout facilities, auditoriums and space to facilitate living-learning arrangements with various academic departments.

The estimated $850 million renovation project would begin in 2009 with the construction of the new residence halls, slated to be open by fall 2011. Mercer would also be demolished in 2011, and the entire upgrade would be complete in 2020.