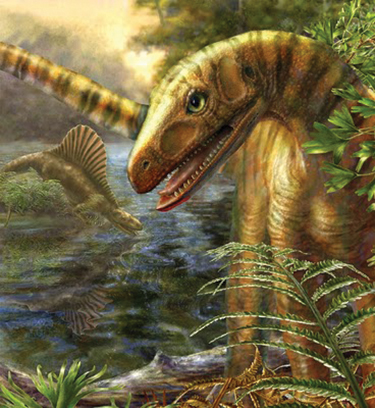 A new fossil find suggests that the roots of the dinosaurs’ family tree are deeper than previously thought.

Asilisaurus kongwe, or “ancient ancestor lizard,” belongs to a group of reptiles called silesaurs. It was unearthed on a 2007 expedition led by Christian Sidor, curator of vertebrate paleontology at UW’s Burke Museum, to the Ruhuhu Valley of southern Tanzania. From fossil bones representing at least 12 different individuals, the research team was able to reconstruct a nearly complete skeleton of the animal—about the size of a Labrador retriever, but with a long neck and a very long tail that brought its total length to nearly 10 feet.

Though Sidor’s expedition didn’t turn up any dinosaurs, it did yield an amazing trove of other dinosaur relatives, giant amphibians, and proto-mammals. “It will take us years to work through all the fossils we have already collected,” Sidor says. Stay tuned for more reports about other animals that shared the ancient ancestor lizard’s Middle Triassic habitat.