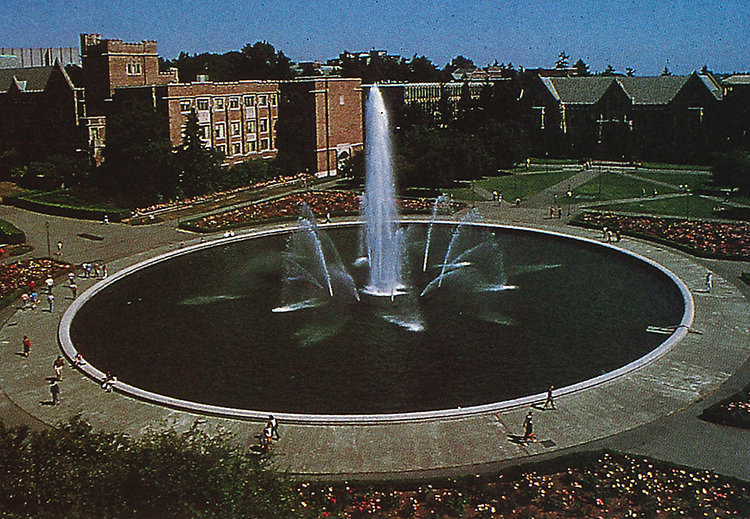 Frosh Pond from the roof of Bagley Hall. Note the floating dock for ducklings on the far right.

What is it about a pool of water that brings out exhibitionists and pranksters? From the moment the UW inherited the 1909 Alaska-Yukon-Pacific Exhibition’s “Geyser Basin,” the pool on Rainier Vista has been the site of sanctioned exhibits and unsanctioned spectacles. A 1961 gift by Regent Joseph Drumheller transformed the pool into a fountain, but the pranks continue to this day.

Though known by such titles as “Freshmen Basin” and “Drumheller Fountain,” to most alumni it will always be known as “Frosh Pond.” In the autumn of 1909 a group of sophomores battled innocent freshmen near Denny Hall. Taking prisoners, one sadistic sophomore recommended a dunking in the basin. Thus the tradition was born of initiating freshmen each fall in the waters of Frosh Pond.

Freshmen have not been the only human beings found in Frosh Pond over the years. As part of its initiation rites, the UW Naval ROTC unit used to dunk its new recruits into the basin. In the photo above, students in the forestry department put on a log-rolling demonstration during the 1953 “Garb Day.” Sailors in sailing boats and divers in scuba gear have used its waters to publicize student clubs. An unauthorized spectacle took place in 1981, when students found a man “skinny-dipping” in the pond in the middle of February.

Non-human items found in the basin range from the mundane to the bizarre. Someone sneaked a seal into the water in 1969. A 1972 student art fair included a huge, floating plastic tube. Students were invited to lie in the tube as it bobbed up and down on the water. In 1979 local fishermen were astonished to catch 12 rainbow trout in the water, most eight to nine inches long.

One of the most notorious items ever found in Frosh Pond was a Domino’s Pizza delivery truck. During a 1981 delivery to Greek Row, the pizza truck disappeared. It was located several hours later totally underwater. The culprits, who were never caught, had the foresight to use ramps so that the pond’s stone rim remained undamaged.

There is a ramp on one side of Frosh Pond today, but it is not meant for pranks played with pizza trucks. During the late 1970s energy crisis, the fountain was turned off and the basin soon became a practice swimming pool for ducklings. A physical plant carpenter often had to rescue ducklings that could not get over the basin’s rim after their swim. She built a ramp and floating “dock” still in use today for easy duck access. 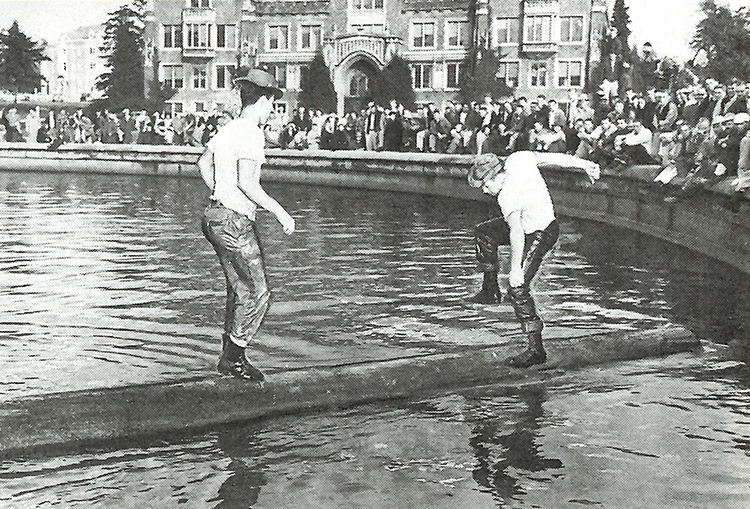