Fruit flies change direction faster than the blink of an eye 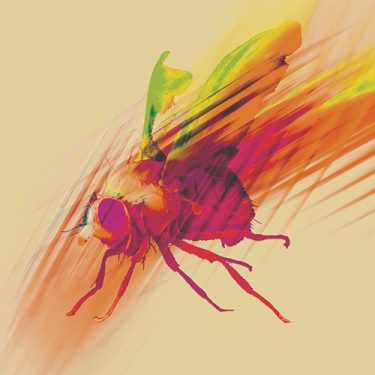 When startled by predators, tiny fruit flies respond like fighter jets—employing screaming-fast banked turns to evade attacks. University of Washington researchers used an array of high-speed video cameras operating at 7,500 frames a second to capture the wing and body motion of flies after they encountered a looming image of an approaching predator.

“Although they have been described as swimming through the air, tiny flies actually roll their bodies just like aircraft in a banked turn to maneuver away from impending threats,” says Michael Dickinson, University of Washington professor of biology and co-author of a paper on the findings in Science. “We discovered that fruit flies alter course in less than one one-hundredth of a second, 50 times faster than we blink our eyes, and which is faster than we ever imagined.”

The fruit flies, a species called Drosophila hydei, rely on a fast visual system to detect approaching predators. “How can such a small brain generate so many remarkable behaviors? A fly with a brain the size of a salt grain has the behavioral repertoire nearly as complex as a much larger animal such as a mouse. That’s a super interesting problem from an engineering perspective,” Dickinson says.

How the fly’s brain and muscles control these remarkably fast and accurate evasive maneuvers is the next thing researchers would like to investigate.