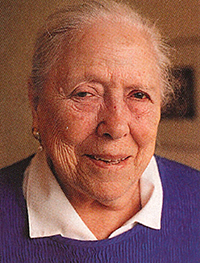 Her eyesight may be gone, but Mary Dreher Tift’s vision of taking family objects—cut glass bowls, cigar boxes, carafes—and turning them into works of art will be on display for everyone to see when the Frye Art Museum in Seattle presents a retrospective of the accomplished Seattle print artist’s career, held from Dec. 22 to Feb. 2, 2001.

Though she went blind six years ago, Tift, ’33, who turns 88 in January, possesses an artistic vision that led to a successful career in printmaking. Her work is in the permanent collections of major museums all over the world, and still stands out today as innovative and engaging.

Since earning her bachelor of fine arts degree from the UW, the Seattle native has used such objects as a bowl of cherries or cigar boxes as inspiration for prints that can be found in such places as the Seattle Art Museum, the Philadelphia Museum of Art and the Brooklyn Museum of Art.

“I was not a portrait person, I was not a landscape person,” she says. “I like to deal with color and design. That’s what draws me to objects. I use them in a design sense.”

After attending the UW art school during the Great Depression, Tift didn’t embark on a studio career right away. She ran a knitting shop in downtown Seattle for five years—”It was a way to use design”—before closing it because of the start of World War II. She served in the Navy during the war, and worked at Boeing in the production illustration unit, making drawings of tiny parts for airplanes.

She went back to school, attending the Art Center College of Design in Los Angeles. That’s where she received a degree in 1947 and met her husband, Bill. She taught at the California College of Arts and Crafts and then the San Francisco Art Institute for 15 years before turning her Sausalito kitchen into a studio and starting a remarkable career as a printmaker at the age of 50.

She learned to incorporate a variety of metals such as lead, zinc, brass and steel with her silk-screening, embossing and collage. She also developed her own silkscreen technique, creating a soft watercolor effect that allowed the paper color and surface texture to show through and become an integral part of the final print.

Her work was a smashing success. Through her connection with the San Francisco Art Institute, Tift began selling her prints in Gump’s Gallery and sold every edition and showed her work in museums around the world. Losing her eyesight, she had to give up printmaking six years ago, moving back to Seattle three years ago after her husband died.

“I still think like an artist,” she says. “I can still imagine the kind of work I would be doing if I could see.” Fortunately, the rest of us can see her work when the Frye exhibit opens later this month.