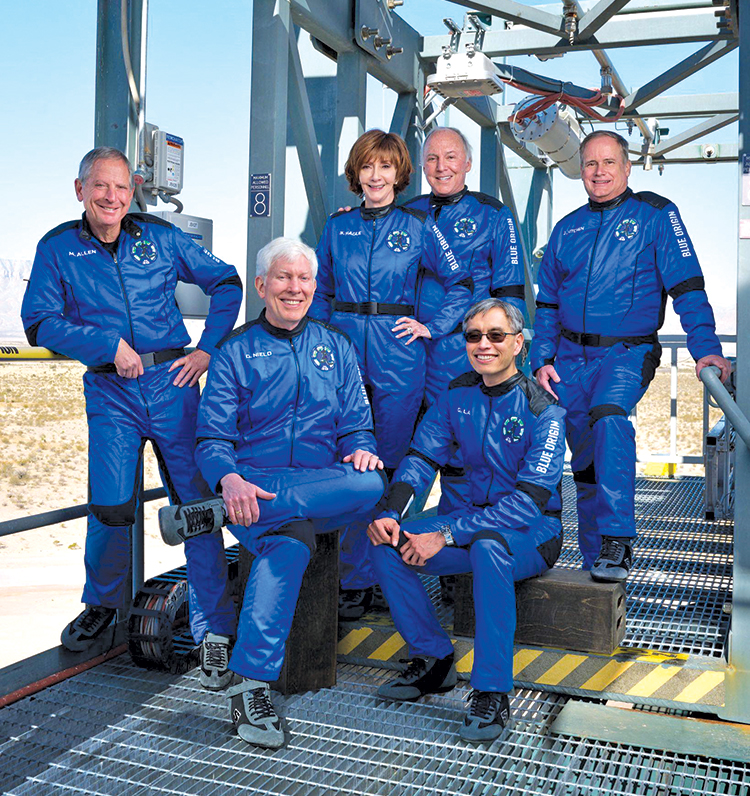 Gary Lai, seated right, was one of the first 20 employees of Jeff Bezos’ Blue Origin aerospace company. In March, he joined five other passengers for the company’s fourth manned suborbital space flight.

When he was asked to fill a seat on Blue Origin’s suborbital rocket launch in March, Gary Lai could hardly refuse. As the lead architect on the New Shepard program, he had a role in planning, coordinating and designing every element. Now he had a chance to experience it for himself.

With New Shepard, Lai was the lead in systems engineering and the person in charge of integrating the entire program technically. He even figured out where the launch site would be and then brought in a general contractor to design and build the facility. He also led the team that developed the crew capsule.

On March 31, Lai joined five other passengers in West Texas for a 10-minute trip, Blue Origin’s fourth human-crewed flight. “It was a combination of everything I expected and not what I expected at all,” Lai says. He entered the capsule thinking he would compare his experience to what he intended in the design and then bring details back to the team.

“I was expecting to be carefully observing,” he says. “And that’s what I did all the way up until the engine started.” But then he hit sensory overload. They soared above 100 kilometers, reaching 2,200 mph, three times the speed of sound. The seats are next to windows 20 times the size of a typical airplane’s. “If you turn your head, all you see is outside,” he says. The sound was deafening. In 60 seconds the sky turned from blue to black. Then the booster throttled back to three Gs, then half a G “and then the engine cuts off and you start floating.” The crew capsule and booster disengaged and the passengers unbuckled their harnesses to float in the cabin for a minute or two. They quickly returned to their seats before the capsule started its descent. Two sets of parachutes deployed to slow it down. Close to the ground, the capsule drifted at 17 mph, landing in the sand and sending up a massive puff of West Texas dust.

“Even to this day, six weeks later, I have complete recall of every second,” Lai says. The physical sensations, the sounds and sights: he can completely replay them in his head. “Only the births of both my children are that memorable,” he says.