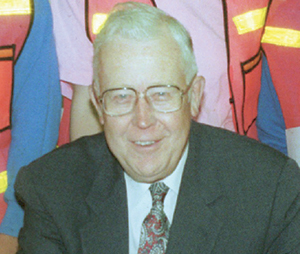 George Benson, ’47, known for his longtime service as a Seattle City Councilmember and at the UW School of Pharmacy, died Oct. 25. He was 85.

The mastermind behind Seattle’s waterfront trolley, Benson served as a councilmember for two decades. With his trademark hands-on style, Benson often spent his days speaking to members of the community. During the construction of the downtown bus tunnel, Benson would walk the streets, talking to small business owners who were losing customers due to the construction. When he was a member of the Metro council, Benson was an advocate for improvement of regional bus service.

Benson met his wife, Evelyn, ’50, at the School of Pharmacy when they were students. The couple married and opened the Bensons’ Mission Pharmacy on Capitol Hill. During the next 46 years, mentorship was always a part of the business. Through their interns and employees, the Bensons did much more than practice pharmacy, they instilled a foundation of civic responsibility.

Rod Shafer ’77, CEO of the Washington State Pharmacy Association, describes Benson as a leader with a simple message of service, “When you went into his pharmacy and they asked, ‘How can I help you?’ it wasn’t just lip service.” The Bensons regularly invited students and young professionals into their home, where they would discuss topics from medicine to community service. “As we graduated and came out to those meetings, they would reach out to you,” says Shafer.

Pharmacy Dean Sidney Nelson, ’68, also met Benson while he was a student at the UW. He describes Benson as an “advocate” and “role model” to the school. The Bensons’ commitment to the school continues through their Benson Endowed Scholarship, which encourages civic involvement and service. “The purpose of the endowment,” says Nelson, “is to help support a student who has need and who has an interest in civic activities and civic leadership.”