Georgia Gerber, ’82, wants you to touch her artwork 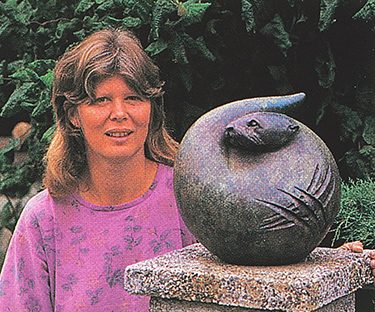 Georgia Gerber, ’82, with one of her creations. Photo by Jon Marmor.

Growing up in rural Pennsylvania, Georgia Gerber spent much of her childhood among cows, horses, pigs and other farm animals. That experience left an indelible impression on her—one that can be seen throughout Seattle and the Pacific Northwest.

Take “Rachel,” the big bronze pig at Pike Place Market. Or the Husky dog in front of Husky Stadium. Or the cows and turtles in Seattle’s University Village shopping mall. Or the animals and people in downtown Portland. Those were all made by Gerber, ’82, who has become one of the most well-known and sought-after bronze sculptors in America.

She recently did a series of bronze orangutans swinging through bronze trees at the Woodland Park Zoo in Seattle. And the city of Wichita, Kan., commissioned her to produce a series of sculptures for a major downtown renovation project.

Gerber’s work is especially popular for its size. “Smaller pieces are not the same,” says Gerber, who received her master of fine arts degree in sculpture from the UW in 1982. “People can relate to things that are life-sized.”

Growing up with farm animals inspired her as a teenager, when she first started making clay sculptures. “I just love to capture the essence of animals,” she says, taking a break in her Whidbey Island studio, where she recently finished a 20-foot-long bronze lunch counter with three seated patrons and a waitress standing behind it. This piece will be the centerpiece of a new park in Wichita. Eight of the 11 seats are left unoccupied, encouraging public interaction with the piece.

And that is a vital element to Gerber’s work. “I like nothing more than seeing kids climb on Rachel at Pike Place Market or the cows at University Village,” says Gerber, who is married and has an 11-year-old daughter. “If people are around the work, then it has meaning. My pieces are not to be observed.”