Women’s soccer began here in 1991. Lucky for us futból fans, Melanie Jackson, ’95, was a Debut Dawg. The 1993 All-American is now a senior editor and writer with ESPNW. 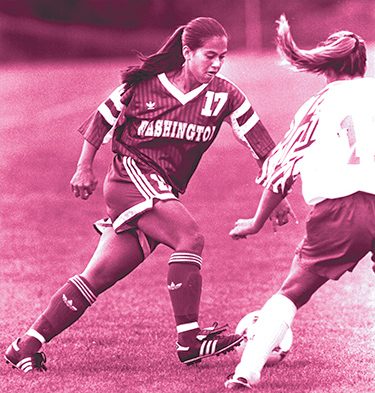 Melanie Jackson during her playing days.

I trusted coach Dang Pibulvech and his vision, visited Seattle and fell in love with the campus. The other selling point was that I also knew a lot of the players on the same recruiting trip. You could see it in our eyes. We had this great vision—maybe we could build (the team). And we did.

It was the best thing ever. I remember the first time I walked out of the tunnel into Husky Stadium and being in awe of the magnitude of being a part of this university that is doing such great things on so many levels.

3. When did you start working in media?

I wrote for my high school newspaper. While at the UW, I pitched a story to the Everett Herald on teammate Emily Thompson, one of our leading scorers. We called her “Tommy Gun” because she had a rifle of a shot. The story ran on Page 1. My professor said maybe I should consider pursuing sports writing.

Covering women’s sports for a living, primarily women’s basketball and women’s soccer, is a dream come true. I love getting to see athletes like Sue Bird and Megan Rapinoe away from the field.

We have the best front line in the world with Alex Morgan, Tobin Heath and Megan Rapinoe. As a defender, I wouldn’t look forward to trying to stop them.