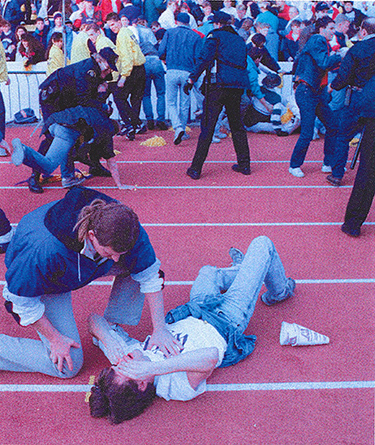 An injured person receives treatment during a melee on Nov. 18, 1989, at Husky Stadium.

When Todd San Jule sat down at his typewriter in the Daily newsroom 10 years ago, he had no idea his words would be blamed for a riot that left three students arrested, four treated for minor injuries and one police officer with a broken wrist.

He was just trying to finish a column on the Husky football season prior to the Apple Cup. The sports editor gave him a whole page to fill. But what could he say about the 1989 season, which had not been going that well for Coach Don James? A loss would make it a 6-5 record without a bowl game. Predicting a victory over the Cougars in Husky Stadium, San Jule gave some advice to Dawg fans.

“When the Huskies beat WSU and you’re jumping around the stands exchanging high-fives and yelling ‘Damn you Cougars,’ take the celebration out to the AstroTurf. But don’t stop there. Once you reach the playing field, you’ll see a pair of goal posts on either side of the stadium. You’ve seen it done many times on television before but probably never been a participant. You’ve always wondered what it’s like to tear down the goal posts.

“The time is now to find out.”

San Jule never suggested confronting police and getting sprayed with Mace, but on Nov. 18, 1989, that’s what happened in an ugly melee.

While fans were jubilant over the 20-9 victory, some were also angry over a new reserved seating policy for students and over the sale of 871 student seats to the general public (for a $10,000 profit). Alcohol was also a factor in the volatile atmosphere. At the final whistle, about 150 fans took to the field, but the first student to climb the goal posts was squirted with Mace by campus officers standing below.

The stadium announcer broadcast a warning that anyone approaching the posts would be subjected to the same treatment, but that just seemed to incite the crowd. “I was standing about 20 feet away from the goal posts when I was sprayed directly in the face,” said UW junior Chris Ramos at the time. Other fans still in the stands reported being sprayed with the tear-gas like substance.

Some fought back, throwing objects such as chairs and beer bottles. Officers and ushers wrestled several students to the ground. The crowd made its way onto the field and security forces were outnumbered. Eventually the crowd succeeded in tearing down the west goal posts and then tossing them into Lake Washington.

The next day, UW Police Chief Mike Shanahan defended his force’s action, stating that safety was the motivation for crowd control—not defending property. “We used a measured level of force. We had to use it,” he told reporters. In a statement about the incident, President William P. Gerberding said, “The basic idea was to try to avoid a situation wherein people might be trampled by others or be injured or even killed by a falling goal post.”

Since the UW incident, other schools have seen similar goal post melees. The most serious occurred in 1993 at the University of Wisconsin after a victory over Michigan, where thousands of students stampeded onto the field and more than 70 were injured.

Today the UW has a new set of stronger goal posts that cannot be torn down. It also has a professional security firm that controls access to the field rather than part-time ushers. Its policy is to discourage fans from coming on the field, but if crowds do break the rules, security forces will try to reduce the chances of injuries.

The UW still reserves the right to use Mace if riot conditions exist, but the plan is to avoid a riot if at all possible. The system worked smoothly after the 1997 Apple Cup, when about 3,000 WSU fans celebrated a victory over the Huskies—and a berth in the Rose Bowl—by invading the field in Husky Stadium. No one was injured, no fights broke out between Huskies and Cougars, and no arrests were made.

In the aftermath of the 1989 melee, several UW officials complained about the Daily article. “That had a lot of influence,” said Athletic Director Mike Lude. Gerberding said, “In my opinion, the incitement in the Daily to tear down the goal posts was a major contributant.”

Today San Jule, ’90, lives in San Diego, where he is a senior on-line producer for Microsoft.

“I can’t say that I regret doing it,” he says of his column from 10 years ago. “I still don’t believe to this day that people thought it was a good idea only after reading the article. I think they would have done it anyway.

“The whole thing could have been avoided,” he adds, “by just letting them tear down the posts.”