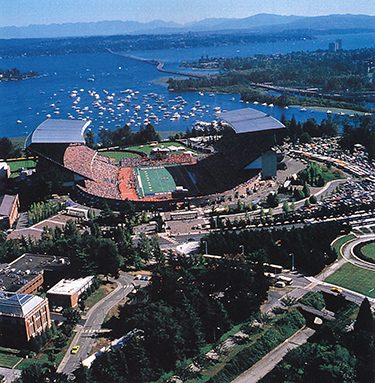 Breaking tradition and defying Seattle’s reputation for wet weather, the University of Washington will hold its 123rd Commencement ceremonies outdoors in Husky Stadium on June 13, instead of indoors in Hec Edmundson Pavilion.

The demand for tickets and the number of students graduating prompted the switch. While Hec Ed can hold about 9,000 for each ceremony, the stadium could hold as many as 74,000. The UW expects about 35,000 to attend this year—5,000 of them graduates.

Graduation ceremonies have been held in Hec Ed since 1928. For the last 12 years, the UW held two ceremonies in the pavilion. “About two years ago we started to fill up to capacity in both ceremonies,” explains Associate Vice President for University Relations Norm Arkans. “Our student population is growing and more students are graduating faster. We had to do something.”

Last year 900 guests had to sit in an overflow auditorium and watch the exercises on TV, says Director of Public Exercises Beverly Gessel. This year each graduate will get automatically four guest tickets and there will be no limit on requests for more.

“No longer will I have people coming to the office in tears because their grandmother is coming to town and they don’t have extra tickets,” Gessel says.

After considering other alternatives such as three ceremonies in Hec Ed or holding ceremonies after each quarter, “we decided to bite the bullet and go into the stadium,” Arkans says.

One factor that has kept commencement out of Husky Stadium in the past is the threat of rain. Arkans says the Department of Atmospheric Sciences projects a 30 percent chance of “moisture” on the second Saturday of June. “We’ve done quite a study,” Gessel adds. “Historically if it rains, it’s been a shower and then it’s over.”

Since graduates will be seated in chairs on the playing field, if it rains they will get wet. “If it rains, we can forgo the traditional march to the stage by each graduate. If the degrees are granted en mass, the whole ceremony can be done in a hour,” explains Arkans.

Jim Lehrer, executive editor and anchor of PBS’s NewsHour, will be the featured speaker. Lehrer became co-anchor of the MacNeil/Lehrer NewsHour in 1976, which has won more than 30 awards for journalistic excellence. When Robert MacNeil retired in 1995, he became the sole anchor. Lehrer has served as a moderator for six nationally televised debates among presidential candidates. In 1996, he moderated all three debates between President Bill Clinton and Sen. Bob Dole.

Lehrer will find that the UW ceremony is more formal and inclusive than at most large universities. For example, all UW graduates participate in the entry procession and march to the stage to receive their diplomas.

This year’s stage will be placed at the east end of the field, between the 20 yard line and the goal line. Guests are encouraged to fill the stadium’s lower deck first, where the view—and the sound—is better.

The stadium will open at 12:30 p.m. and concessions will be available. Each graduate will receive one free parking pass and can request one additional pass. “Parking is limited so we encourage everyone to carpool,” says Gessel.

UWTV will broadcast the ceremonies on Channel 27 of most local cable systems and will sell videotape of the proceedings.