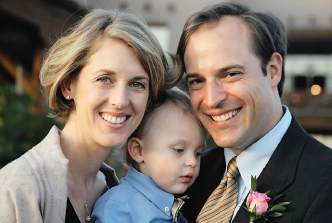 When Gretchen Howison Whiting, ’90, was diagnosed with stage III melanoma in 2004, she began a journey—not just to heal herself but to educate the public about the deadly disease, push for more funding for melanoma research, and continue to live her life to the fullest.

In the 4½ years until her death on May 12 at the age of 40, Whiting never lost her tenacity or will to make an impact.

While undergoing treatment at the Seattle Cancer Care Alliance, she participated in clinical trials at the Fred Hutchinson Cancer Research Center and became a speaker and fundraiser for the cancer center. She was the patient speaker at the Annual Hutch Award Luncheon in 2007 and at the 2008
Hutch Holiday Gala.

For the past three years, she and her family have been the top fundraisers at the cancer center’s annual Shore Run/Walk, raising more than $40,000. Last year, she and her husband, Ren, launched Love Your Shade Foundation (www.loveyourshade.org) to raise awareness of the dangers of tanning and to promote research into melanoma. She also wrote an essay about her experience as a cancer patient, “Honeydew,” for the book Chicken Soup for the Soul: The Cancer Book, which was published in March.

Whiting is survived by her husband, Ren; her son, Jack; her parents; her brother; a niece, Hannah; a nephew, Andrew; and her grandmother, Lillian Bailey.