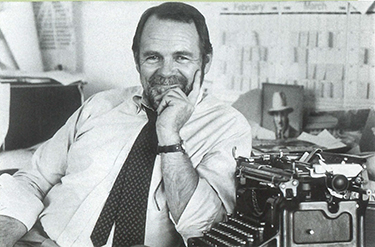 Few editions of the Tyee, The UW’s yearbook, have been as striking in appearance as the 1954 volume—with cover, title pages and section pages all done by the distinctive hand of Hal Riney. At the age of 21, Riney had developed a quirky line-drawing style that seemed equally indebted to Picasso, Saul Steinberg and Dr. Seuss.

Riney graduated with an art degree that year, and went on to lend his virtuosic hand to some of the most memorable advertising campaigns of the TV era. The creator of Ronald Reagan’s famous “Morning In America” ad, the Bartles & Jaymes wine cooler series and the Saturn car company launch, Riney was a towering figure in the world of marketing. He died March 24 in San Francisco, at the age of 75.

Riney was born in Seattle on July 17, 1932, and raised in Longview. After graduating from the UW, he served in the Army until 1956, when he kicked off a nearly 50-year career by working in the San Francisco mailroom of ad agency BBDO. Riney rose through the ranks quickly, becoming the company’s executive vice president and creative director in 1968.

Ronald Reagan had Riney to thank for setting the positive tone of his 1984 re-election campaign, which ranked No. 43 on Advertising Age’s list of the top 100 advertising campaigns of the century. It was Riney’s gravelly voice that could be heard intoning, “It’s morning again in America” in Reagan’s iconic commercial.

“I was told at the time that the only kind of political advertising that worked was negative advertising, where you lied about your opponent’s faults,” Riney said in a 2002 presentation at San Francisco’s Academy of Art College. “And I went to Washington, D.C., and I listened to the researchers talk about negative advertising for two days, then came home and sat at the bar here in my office for two hours and wrote what I thought would be a better presidential campaign.”

Riney won hundreds of advertising awards throughout his career. Advertising Age named Hal Riney & Partners the agency of the year in 1993 and ranked him No. 30 on a list of the top 100 ad figures of the 20th century. In 2002, he was inducted into the American Advertising Federation’s Advertising Hall of Fame.