Henry Villard, the donor who saved the ‘U’ 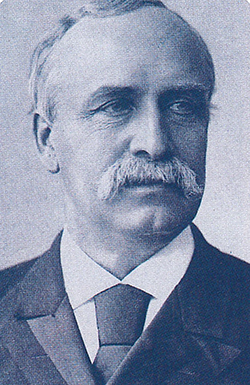 The UW was facing a crisis. Without funds from the state Legislature, the school was forced to cut programs and faculty. Tuition was one solution but an extremely unpopular one. The strapped president was left with nowhere to turn. His only hope was a donation from a charitable citizen.

In the late 19th century, times were hard. The fledgling University of Washington had already closed four times and was struggling to keep afloat. When Alexander J. Anderson was appointed University President in 1877, the consensus in Olympia was that this was the last chance. If the school closed again, chances were it would never reopen. The small school in the middle of the rough and tumble Washington territory was quickly losing support as the lumberjacks and fishermen questioned whether higher education was really a realistic priority. Said Territorial Superintendent of Public Instruction B.F. Lippencott: “If the matter is well-considered we shall find that we are not yet prepared for a territorial university. … Our common schools demand our attention first.”

However, in Anderson’s five years as University president, the regents spoke of the school as “eminently successful,” thanks to the efforts of the president, a “skillful, experienced, and devoted instructor of youth.” Several new courses of study were introduced, and the 1879 state Legislature appropriated $500 for scientific apparatus and chemicals. 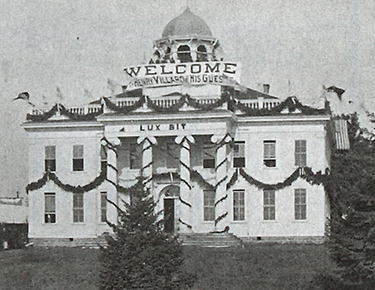 The UW’s downtown building is decorated in honor of Villard, whose donation saved the UW from closing in 1882.

But Anderson never fully managed to rid the school of its hand-to-mouth existence. His plan to ease the school’s financial woes was to impose a territorial tax to support the University. The regents backed the President and a group of citizens endorsed the appeal in a written pamphlet. They argued that the University was not a private or local institution but one that belonged to the common people. It was the duty of every organized community “to contribute its due proportion to the … perpetuation and promulgation of the arts and sciences by fostering and encouraging institutions devoted to the higher branches of education.”

But the Legislature killed the idea. Shortly before he resigned from the University in the early 1882, Anderson warned that the UW could last no more than a year if the appropriations he requested were not issued.

Into the crisis stepped Henry Villard. The owner of the Northern Pacific Railroad was a well-known philanthropist who had contributed all the money for the construction of the first building at the University of Oregon.

Villard’s tale is a classic immigrant success story. Arriving in New York as the poor, teen-age son of German immigrants in 1853, he mastered the English language in three years and eventually turned himself into one of the most prominent American businessmen during the Gilded Age. He financed early ventures by Thomas Edison and married Helen Frances Garrison, the daughter of ardent abolitionist William Lloyd Garrison.

Upon being told that the UW appropriation was denied, he promptly donated $1,000 and a total of $4,000 over the next two years.

“It is a great pity, nay, indeed a shame,” he wrote, “that those charged with the legislative welfare of the Territory should be so short-sighted as to permit your institution to languish. But this is not an uncommon experience in this country, even in some older and flourishing states, the interest of higher education is sadly neglected.” Perhaps moved by Villard’s dedication, the Legislature appropriated $3,000 in 1884 and thereafter continued to make provisions for the struggling school.

Shortly after he witnessed the driving in of the “last spike” in his Northern Pacific Railway on Sept. 18, 1883, Villard made stops all over the Washington Territory including Seattle. When he arrived a parade and a barbecue were held in his honor. In his memoirs, it is written that: “Seattle was reached with an escort of more than a score of steam vessels. The last scene of the transcontinental celebration was fittingly enacted on the grounds of the University of Washington, which Mr. Villard had relieved from distress.”

Seattle residents greeted Henry Villard with a parade that included decorated oxen. In the upper left is the UW’s original building.