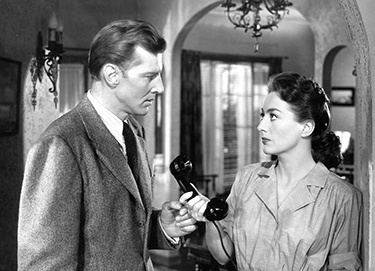 Herman Brix (under the screen name of Bruce Bennett) plays opposite Joan Crawford in the 1946 classic “Mildred Pierce.”

Herman Brix, ’28, also known under the screen name of Bruce Bennett, died Feb. 24 after living an eventful 100 years. Born in Tacoma, Brix excelled as an athlete at the UW. He played offensive and defensive tackle on the 1926 Rose Bowl football team, and in his senior season he was a lineman as well as kicker. However, Brix’s most notable collegiate achievement was as a shot putter for Husky track and field. He won six national titles and was invited to Amsterdam for the 1928 Olympics, where he won the silver medal.

One year later, Brix was living in Los Angeles and preparing for the 1932 Olympics when he received an invitation to train at the private gymnasium of Douglas Fairbanks. Brix found that, thanks to his connection with Fairbanks, doors were opening for him to pursue an acting career. He was barely beaten for the role of Tarzan in MGM’s film adaptation by Olympic swimmer Johnny Weismuller. However, Tarzan creator Edgar Rice Burroughs personally chose Brix to star as the hero in his own production of The New Adventures of Tarzan in 1935.

Concerned that his performance as Tarzan would typecast him, Brix changed his screen name to Bruce Bennett. He went on to star in over 100 feature films, including the role of a prospector in The Treasure of the Sierra Madre with Humphrey Bogart (he beat out Ronald Reagan for the part) and as Joan Crawford’s ex-husband in Mildred Pierce. Over the course of his career, Brix shared the screen with Jimmy Stewart, Bette Davis, Cary Grant, Ronald Reagan and even Elvis Presley.

In Mike Chapman’s 2001 biography, Please Don’t Call Me Tarzan, Brix said, “How many Hollywood parties did I go to? None. I was determined to keep my sanity.” He and the love of his life, Jeanette Braddock, eloped in 1933, just nine months after their first date. Brix cited their 67-year marriage as his greatest achievement.

Tiring of acting, Brix left Hollywood for the business sector in the early 1970s. Equipped with his B.A. in economics, he began selling real estate in Los Angeles and also ran a vending company.

Throughout his life, Brix remained proud of his alma mater. He attended the team practice preceding the 2001 Husky Rose Bowl game against Purdue and was honored with a game ball after the team’s victory.  “I wanted to be a rancher,” he recalled in Chapman’s book. “I have a hard time believing it all happened.”