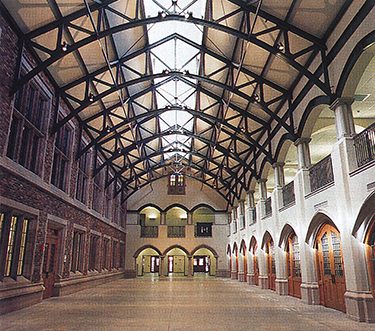 The Commons at the new Mary Gates Hall. Photo by Kathy Sauber.

Inside the shell of a 1928 structure sits the University’s first true 21st century building—a mix of computer labs, electronic classrooms and expanded undergraduate services housed in what was once a physics building and is now named Mary Gates Hall.

It is home to a huge computer lab with 180 workstations; 23 electronic classrooms that have video, audio and data connections to the Internet; and three ‘colaboratories’ fully stocked with computer power at the fingertips of each student. But just as important, many undergraduate student services finally have a home together. Students can get freshman orientation, academic counseling, internships, Honors Program assistance and career services without leaving the building.

“It really is a special place, no doubt about it,” says Dean of Undergraduate Education Fred Campbell. “It is a place that represents the best education the University can offer.”

The $48.3 million renovation of the old Physics Building, located south of Suzzallo Library, included construction of new exteriors that closely resemble the 1928 Collegiate Gothic original wing. The 127,000 square feet of existing space was completely gutted for new classrooms, labs and offices and about 58,000 square feet was added east of the original building.

The building is named after the late Mary Maxwell Gates, ’50, who served on the UW Board of Regents for 18 years and was a strong advocate for undergraduate education. Attending the May 8th grand opening celebration were her husband, Regent William H. Gates, ’49, ’50; and her three children, Libby Armintrout; Kristi Blake, ’75; and Microsoft Chairman Bill Gates. A $10 million gift from Bill Gates and his wife, Melinda, established the Mary Gates Endowment for Undergraduates in 1995 and a subsequent gift has doubled that amount. Another $3 million contribution funded audio-visual classroom equipment in the building. While state capital funds covered almost all of the renovation and new construction, an additional Gates gift of $1.7 million also went into the capital budget.

As students enter the building, the first space they encounter is the two-story Commons area with a cathedral ceiling and natural lighting. Offices for advising, career services, internships and a computer lab surround the open room. Doug Jennings, the project manager, says the Commons will be as memorable to 21st century students as the Suzzallo Reading Room is to 20th century alumni. “When today’s students come back to campus as alumni, that will be one of the spaces they want to see again,” he says.

Upstairs are classrooms fully equipped for multimedia presentations. There are also 10 breakout rooms that professors can use when they want their students to work in teams. Several classrooms have video monitors for distance learning opportunities.

The outside of Mary Gates Hall is as extraordinary as its interior. The Seattle firm Bassetti Architects and Washington, D.C.-based Hartman-Cox took care to match the 2000 wing to the brick and cast stone of the 1928 building and its 1948 addition. From the outside, the untrained eye may not tell where the original structure ends and the new addition begins.

“I’m not sure if you want to use the word ‘match’ or ‘copy,'” says Jennings. “The intent was to design something that works with the historical context. It celebrates the fact that this is an old building with a new addition on it. It is not a building that is going to be dated.”

For Undergraduate Dean Campbell, the building finally puts into a physical space the University’s vision for undergraduate education. “It is a place where teaching is linked to research and public service,” he notes. “It combines academic services in one place that students need to achieve their very best.”