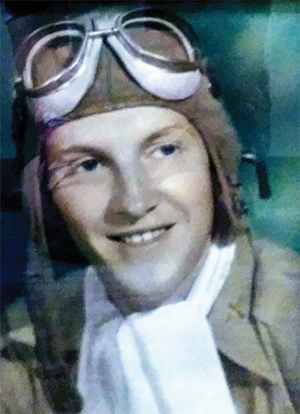 On the morning of March 6, 1944, 1st Lt. Herschel H. Mattes, a 22-year-old Army pilot from Pittsburgh, flew his A-36A Apache ground attack/dive bomber in central Italy, looking for targets. The plane, which he called “Stelloola” after a nickname he had given his kid sister, Estelle, was hit by gunfire from below. It crashed on the grounds of a villa 25 miles northwest of Rome.

German soldiers occupying the villa buried Mattes—with scraps of his flight jacket—just yards from the house. They marked the makeshift grave with a wooden sign identifying the remains as an American fighter-pilot who was shot down on March 6, 1944.

Three years later, a team from the Army’s Graves Registration Service moved the remains to an American military cemetery on the other side of Rome. With no dog tag or other means of identification, the body was reburied and entered onto the military’s roster of unidentified dead as X-977.

So began a story that, astonishingly, would take 75 years to reach its conclusion. It did so with the help of Stephen Johnson, ’99, a historian with the Department of Defense.

After Johnson completed high school in Ohio, he spent four years in the Air Force, and then lived in Colorado and Washington for about 10 years, acting in theater productions. While in Seattle, he signed up for a community college course about the American presidency. “I woke up and asked, ‘Where have they been hiding higher education all my life?’” Johnson says.

He enrolled at UW for more history. “My first couple of years, I was older than my professors,” he recalls. “I was nearly 40, what they call a nontraditional student; the UW was a perfect venue for that.” He was inspired by campus—the Gothic grandeur of Suzzallo Library—and faculty historians like Herbert Ellison, Jon Bridgman, Kenneth Pyle, Wilton Fowler and Mary O’Neil.

The UW experience made him want more so he decided to pursue a Ph.D. at the University of Maryland. He focused on 20th-century American cultural and political history, with some emphasis on military history. After graduate school, he landed a fellowship doing historical research for a Department of Defense contractor to trace missing soldiers.

For many years, the federal government had been trying to locate missing personnel and identify unknown remains on an ad-hoc basis, Johnson explains. In 2010, the DOD started to ramp up its investigative work, eventually forming the Defense POW/MIA Accounting Agency to find missing service members and identify those buried as unknowns from conflicts dating to World War II. Today, DPAA employs around 600 people—half are military and half civilians including historians like Johnson, forensic anthropologists and archaeologists, divers, mountaineers, linguists and explosives experts.

Some 82,000 missing military personnel are on the agency’s master list, more than 72,000 of them from World War II. Less than half—about 30,000—are considered possibly recoverable. Johnson and his colleagues are charged by Congress with identifying at least 200 previously missing personnel or those buried as unknowns each year. For the past few years, they’ve met or exceeded the goal. “We owe it to the missing, who served,” Johnson says. “We owe it to the families, who have been mourning their loss. And we owe it to the country, which makes a guarantee to anyone who serves that we will not leave you behind.”

Johnson began working on case X-977 in May 2010. “I looked at the reported air losses in that part of Italy, and I came to believe that X-977 was Lt. Mattes. But it took a while to marshal all the evidence necessary to justify disinterment.”

Johnson contacted the current owner of the villa where the plane crashed. The owner put him in touch with Vincenzo Lucherini, who, as a teenager in Manziana, had heard local war tales. He later took up the idea of bringing closure to the families of those who lost their lives trying to free his town. “Third-party researchers like Vincenzo are incredibly important to the work we do,” says Johnson. “They funnel information to us, and they aren’t looking for payment or glory. It’s completely altruistic.”

In 2011, Lucherini visited the villa and swept the site with a metal detector, says Johnson. He found a piece of aluminum no bigger than the palm of his hand. It carried the partial number from an aircraft part with a prefix unique to the A-36A. “That confirmed what we’d both already concluded from the documentary evidence: X-977 was Mattes,” Johnson says.

A piece of the A-36A Apache downed by Germans in Italy during World War II. It helped the U.S. Department of Defense discover the fate of the missing pilot.

The following year, Johnson and a colleague visited the villa. In anticipation, the pilot’s sister, Estelle Sherry, provided a DNA sample, as did next-generation family members. But Johnson still had to make the case to dig up the remains and send them to the Armed Forces DNA Identification Laboratory in Delaware. It took until 2015 to get the disinterment order.

“You get passionate,” Johnson says. It’s hard to be patient because the evidence is so compelling. Four more years passed before the lab could provide an answer. “At first, they couldn’t get a reportable DNA sequence because before the remains were buried in 1947, they were treated with a preservative, a hardening compound, and that locks the DNA within the bones,” Johnson explains. But DNA science improves every year. “The folks at the DNA lab would not give up,” Johnson says. “Last year, finally, they could extract what they needed and make a match with the family’s samples.”

On a sunny fall day in Connecticut, family and friends gathered for the funeral of a person only Estelle had ever known. The graveside service—a blend of military and Jewish tradition—had an American flag and six white-gloved military pall bearers. A bugler played “Taps.” Both Johnson and Lucherini were seated in the front row, next to Sherry. “You’re family,” they were told.

Sherry, a 93-year-old retired community college professor, recalls the day. She was grateful for the efforts of Lucherini and Johnson and still in some shock that they had discovered her brother’s fate and were able to bring him home. “Hershey was my big brother, six years older. He’s the one who taught me to ride a bicycle, and I spent my whole life missing him,” she says. “I never expected this to happen.”