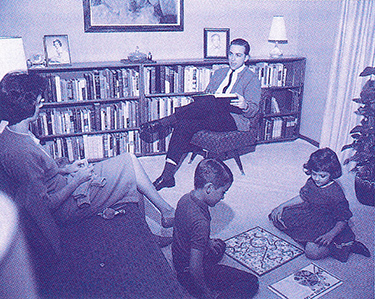 The Oakland family enjoys the living room of their Sand Point apartment in this 1964 photograph. Left to right are wife Helen, husband James, son Bob and daughter Joni. (Photo by James Sneddon)

When the wartime boom hit the Sand Point Naval Air Station on the shores of Lake Washington, the U.S. Navy slapped up temporary officers’ quarters at the south end of the base. No one imagined that they would last into the next century, but 58 years later they still stand.

In 1957, years before the entire base closed, the University of Washington took over the temporary quarters, transforming them into married student housing that today includes 232 apartment units. For more than 40 years, the Sand Point housing complex has been home to thousands of married UW students, their spouses and their children, offering modest apartments at extremely low rates.

“It was very cheap. We paid maybe $65 a month,” says James Oakland, ’66, who lived at Sand Point from 1963 to 1966 with his wife and two children while studying for his Ph.D. in psychology. “It would have been much more difficult to make it through grad school without that break.” Oakland fondly recalls the sense of community—there was even a babysitting co-op where parents would exchange child care responsibilities.

But starting this summer, the “temporary” housing left over from World War II will see the wrecking crew. UW Housing and Food Services has signed a contract with a non-profit housing agency to tear down the buildings and build modern apartment units with a new name: “Radford Court.”

“Those units are just used up,” says Paul Brown, director of the UW’s housing program. The cost of renovating electrical, plumbing and heating systems has become excessive, he explains. “It makes more sense to knock them down and build new ones.”

The new Radford Court will be low units of two or three stories. Construction will preserve many of the trees currently on the site. Drawing courtesy of Mithun Partners.

When the new complex is completed in 2002, it will have 400 units, almost double the current capacity. Modern heating, electrical and water systems will serve the apartments, and they will be fully wired for telecommunications of the 21st century. The new structures will be low buildings set among the trees on the site. “We will keep the site as comfortable and parklike as possible,” says Brown.

But the $54 million project will cause a hefty rent increase that has some residents scrambling. Currently the rates run from $426 for a one-bedroom unit to $666 for a three-bedroom unit. “Rents out there have been a gift to students for years,” Brown says.

A fall 1999 survey by Dupre+Scott Apartment Advisors found average one-bedroom rentals in the “U” District were $662 per month. Two-bedroom units were $950 per month. While Radford Court rents have not yet been set, Brown says the new units will be from 10 to 20 percent below market rates for new apartments. “They are going to be considerably more expensive,” he concedes.

Current residents are unhappy about the increase. “I don’t feel the University seriously considered our position that rents are not affordable as they are proposed,” graduate student David Wood told the press. Wood has been living at Sand Point for four years with his wife, Patricia, and two children.

Demolition of half the units starts this summer, with the first phase of new construction completed in fall 2001. Workers will then tear down the remaining old structures, with the second phase opening in fall 2002. While the slightly ramshackle Navy buildings will finally be put to rest, the University plans to continue serving UW students and their spouses, partners and children—the legacy of Sand Point.