How far to the moon? UW researchers to find out precisely 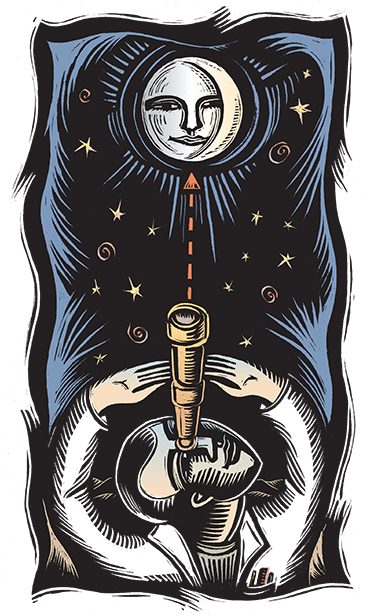 Using laser beams, 30-year-old reflectors and 21st century computing power, UW scientists plan to make the most exact measurement of the distance to the moon in history—accurate to the width of a paper clip.

Scientists have long known the center of the moon is, on average, about 384,403 kilometers (238,700 miles) from the center of Earth. Over the last 30 years, the accuracy of that number has increased so that the margin of error is about 2 centimeters (less than one inch).

If UW postdoctoral researcher Tom Murphy has his way, he will reduce that uncertainty to a millimeter—about the thickness of a paper clip.

Using the Apache Point telescope in New Mexico, Murphy and his team will aim high-powered laser beams at “retroreflectors” left on the surface of the moon by three Apollo missions (including Apollo 11, the first mission to land astronauts on the moon) and two unmanned Soviet missions. The retroreflectors, each the size of a suitcase, are banks of prisms that can reflect a beam of light back to its point of origin.

“Only one in 30 million of the photons that you launch to the moon will actually find the retroreflector. It’s like winning the lottery—very tall odds,” Murphy says. “And then for a photon to make it back to the telescope, the odds again are about one in 30 million.”

The laser can peak at a gigawatt (1 billion watts) of power, generating a 1-inch “bullet” of light aimed at the lunar surface. The team will calculate the distance by measuring the light pulse’s round-trip travel time and multiplying that figure by the speed of light.

In making such a precise measurement, the team will perform the most sensitive tests ever done on several features of gravity. One test could help determine if the force of gravity is diluted as the universe expands. “We don’t know enough about gravity, so we have to probe gravity with every tool we have available,” Murphy says.

The project, paid for by NASA, is actually a feasibility study for performing laser-ranging experiments from space. Murphy expects to begin taking measurements in about a year, and says the work is likely to last five years. The team includes Astronomy Professor Christopher Stubbs, Physics Professor Eric Adelberger and Jana Strasburg, a physics graduate student.