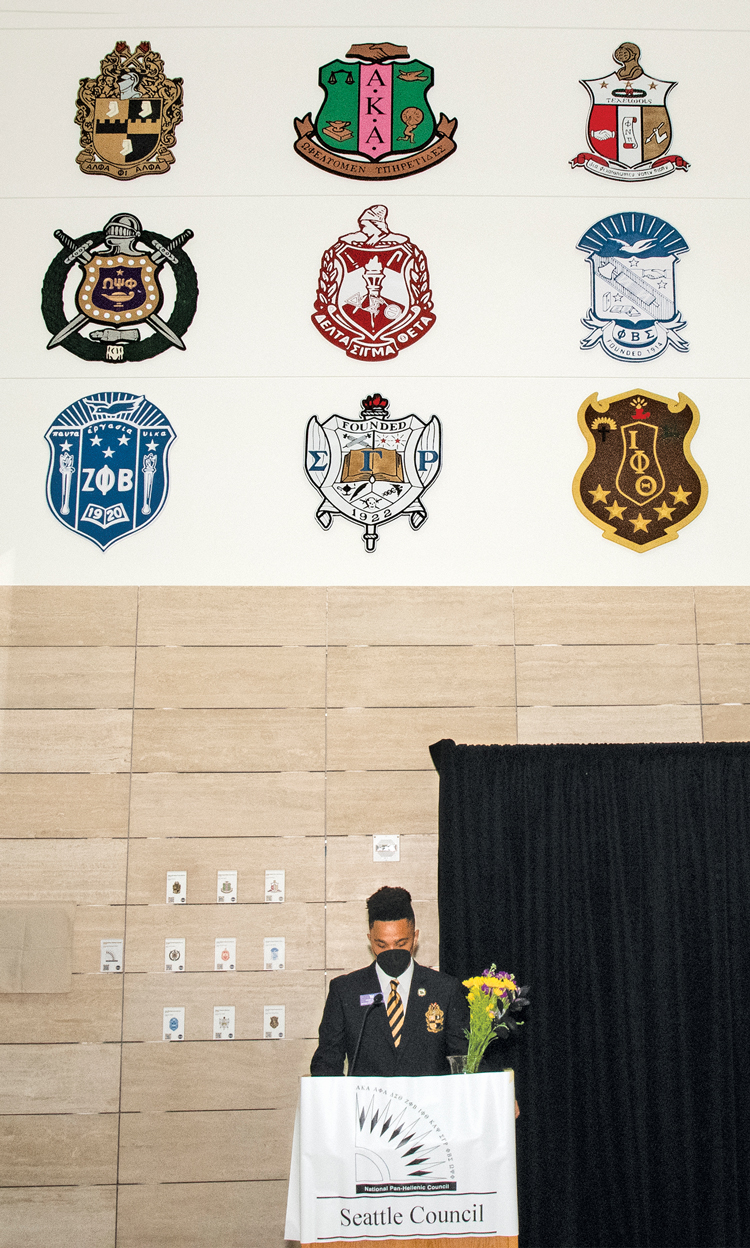 Calen Garrett, president of the National Pan-Hellenic Council’s Seattle chapter, speaks to a gathering of NPHC members and alumni at a dedication ceremony for the crests of the Divine Nine, traditionally African American fraternities and sororities. (Photo by Emile Pitre)

In 1933, the Delta Sigma Theta sorority established a chapter at the UW, paving the way for five other Black sororities and fraternities. There are now six active chapters at UW. Even then, the organizations understood that membership in a fraternity or sorority could change the way a student participates in all other college activities. This has been especially true for members of historically Black Greek-letter organizations in predominantly white colleges and universities.

While Black fraternities and sororities have thrived at the UW, their presence over the years has gone generally unrecognized. But now, thanks to the work of current students, their crests are on display in the HUB for all to see.

Black students who join the organizations may find an instant community, engage in sys­tems of support designed to help them navi­gate white-centered institutions and develop lifelong net­works with like-minded alumni. Additionally, the organizations offer students opportunities to develop leadership skills, support philanthropy and become mentors for those who join after them.

The governing body for nine historically African American fraternities and sororities, also known as the Divine Nine, is the National Pan-Hellenic Council (NPHC). Many alumni of NPHC-affiliated chapters work as faculty and staff across all three UW campuses. Calen Garrett, president of the UW NPHC chapter says, “It’s just funny how all over campus there are people who are members of these proud organizations that have been here for so long, yet no one seems to know that we’re here and all we do for the community.

“We needed something physical to affirm that we’re here so people can see us. The other Greek councils have the entire Greek row that people can see and witness and experience every day. There was nothing really there for us that served as a beacon for us to gather.”

Last spring, Garrett was inspired by news that the University of Kentucky was publicly displaying its NPHC-affiliate crests. He started working with OMA&D and Student Life leadership toward a dedicated space where people could see an NPHC presence and find a spot for the Black Greek community to meet. In August, all nine NPHC crests were installed on the main floor of the HUB just outside the Associated Students of the University of Washington offices.

“So far the reception has been amazing from the alumni community,” says Garrett. “A lot of them come from schools that already have had crests installed for some time or even permanent plots or monuments, and it’s been amazing to have that love from so many people who are so far out of college, that they really just want us to have the same experience they had in school.” Garrett credits the short timeline and success of the project to the support from UW leadership. “It’s really about the future, and future students of color who come to campus to have something that speaks to them and speaks to their experience,” he says. “That’s what it’s all about, the future and all the marginalized students of color who come after me.”