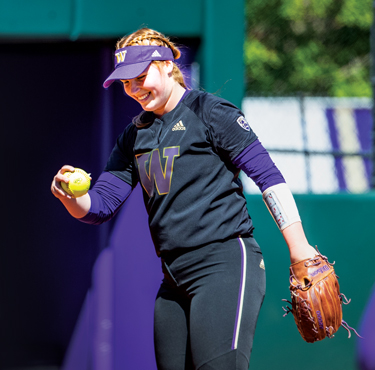 The conference of champions presented graduating seniors Gabbie Plain and Dylan Teves with the 2021-22 Tom Hansen Medal as the UW’s outstanding female and male student-athletes based on their performance and achievement in scholarship, athletics and leadership. And Tina Frimpong Ellertson, one of the greatest players in Husky women’s soccer history, was inducted into the Pac-12 Hall of Honor, the conference’s most prestigious recognition for student-athletes.

Plain, who grew up in Australia, is a four-time All-American pitcher who led the Huskies to a runner-up appearance in the 2018 College Softball World Series. The second Husky to be a four-time All-American, she was the second Husky ever to record more than 1,000 career strikeouts (1,068) and the fourth pitcher to record 100-plus wins (she had 108). She also represented Australia in the 2020 Summer Olympics. 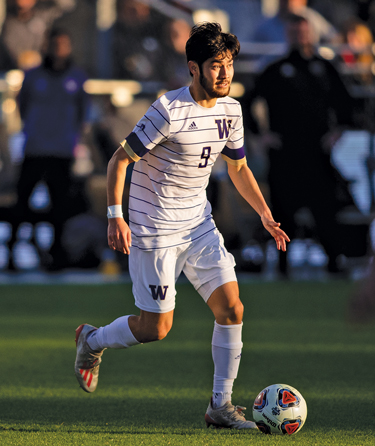 Soccer midfielder Teves, who was born in Honolulu, earned a ton of honors during his four years at the UW, including being named a finalist for the MAC Hermann Trophy, the highest honor in college soccer. A first-team All-American who came to the UW from Liberty High School in Renton, he now plays for the Seattle Sounders of Major League Soccer.

The Tom Hansen Medal is given annually to each member institution’s premier student-athletes—and how fitting it is that the award is named in honor of Hansen, ’59, who served 26 years as the Pac-10 commissioner until his retirement in 2009.

That brings us to Frimpong Ellertson, a native of Vancouver, Washington, who played for the Huskies from 2001 to 2004 and is now an assistant coach for the Huskies, having joined the team in 2020. 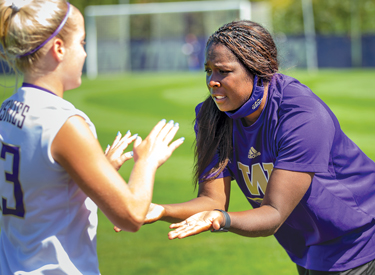 A two-time Pac-10 Player of the Year, she is the UW’s all-time leader in goals and points. In 2004, her senior season, she helped the Huskies make their first appearance in the Elite Eight. She played at the professional level for several years and spent five years on the U.S. Women’s National Team. She also competed for Team USA in the 2007 World Cup in China.

Once her playing days were over, Frimpong Ellertson—a two-time All-American in 2003 and 2004—started her coaching career. She began as a U.S. Youth National Team coach before returning to the UW as an assistant coach two years ago. In her first year, she helped the Huskies reach their sixth Sweet 16 appearance.

We win in the classroom—again

Led by three women’s Husky programs that recorded a maximum 1,000 and Husky football’s conference-leading 993 score, UW student-athletes once again excelled in the NCAA’s latest Academic Progress Rate, which covers the 2020-21 school year. UW’s score of 986 marked the ninth consecutive time that all of Washington’s student-athletes scored above 980. Husky football’s score of 993 again ranked first in the Pac-12 (take that, Stanford, Cal and UCLA). Husky softball, women’s track and field, and women’s cross-country teams placed first or tied for first in the conference with their 1,000 scores.

On the coaching front

Jason Kelly, who previously spent seven seasons as pitching coach for Husky baseball, was named head coach. He succeeds Lindsay Meggs, who announced his retirement after the 2022 season. … Rahim Esmail succeeded Matt Anger as head men’s tennis coach following Anger’s retirement after 28 years. Esmail served as associate head coach last year. He and Anger led the Huskies to their first NCAA Championships berth since 2017. Esmail joined the Huskies in 2021 after coaching at Samford University. … Washington’s upward ascent in cross country and track and field under coaches Maurica and Andy Powell will continue, as their contracts were extended through 2029. The Huskies had five Top-25 finishes last year in six NCAA Championship meets.