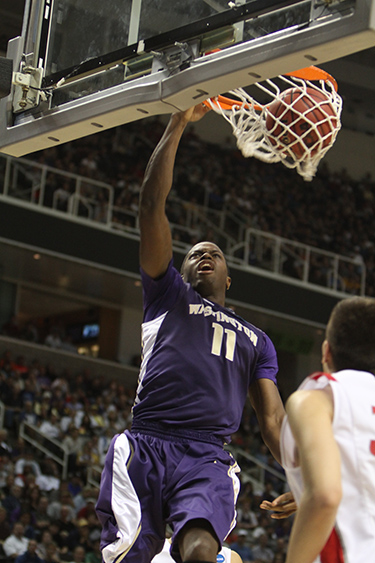 Most Husky fans know UW basketball player Matthew Bryan-Amaning for his thunderous dunks and high-flying shot-blocking ability. But off the court, the 6-foot-9 junior is the epitome of the UW student-athlete, who, in addition to meeting the rigorous demands of his sport and his studies, is a big man on campus and in the community.

Fellow Husky athletes look up to Bryan-Amaning because he serves as a peer advocate within in the UW’s Intercollegiate Athletics Department. In that role, he and other upperclassman student- athletes mentor incoming and young student-athletes. It’s just one of the many academic support services the University provides to its student-athletes.

“We provide advice on how to adjust to school and keep up with schoolwork, particularly during the season,” Bryan-Amaning says. “We might miss class two days a week when we go on the road, and it can be easy to fall behind. We want to make sure they keep up with their schoolwork.”

Bryan-Amaning also volunteers in the community with the rest of his teammates. Coach Lorenzo Romar organizes food drives and visits to Seattle Children’s Hospital, where Bryan-Amaning loves to play video games or paint T-shirts with ill kids.

“You see how you make a difference in a person’s life,” he says. When Bryan-Amaning is done with basketball, he plans to put his sociology degree to use by running an afterschool program in an urban area.

“I like working with kids,” he explains. “It’s important to keep them off the streets. My mother didn’t want me on the streets, so that’s how I got involved in basketball. I just want to continue that.”