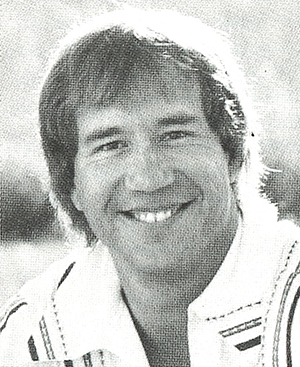 Husky Rose Bowl games have been described many ways by many people—from fans, to sportswriters, to oppos­ing coaches. But perhaps no one has said it—or to be more accurate, sung it—the way Jack Gladstone does in “Pasadena Free For All.”

Gladstone, ’82—a composer, musician, lecturer and enrolled member of the Montana Blackfeet tribe—includes “Pasadena Free For All” among 15 songs in his second album entitled “In the Shadow of Mt. Lassen.” The song was inspired by his experience as a member of the UW football team that defeated Michigan 27-20 in the 1978 Rose Bowl.

A graduate in speech communications, Gladstone’s first destination with his new college degree was the Blackfeet Indian Reservation in northwestern Montana, where he taught communications at the Blackfeet Community College. In 1985 he became lecture series coordinator for Glacier National Park and the Blackfeet tribe. His popular presentations interweave legend and song with tribal mythology and history. Gladstone continues to lecture on a variety of topics including “Historical and Contemporary Perspectives on the Wolf.”

Gladstone became a full-time performing and recording artist in 1987. He’s toured from Boston to Seattle and served as the opening act for such entertainers as Bonnie Raitt, Dan Seals and Michael Martin Murphey. One reviewer has described him as “a Jack London metaphor with the voice of Gordon Lightfoot.”

Known for his storytelling throughout his concert performances, Gladstone strives to build harmony between cultures and with the environment. He’s currently working on “Rediscovering America,” a musical, visual production commemorating the 500th anniversary of Columbus’ landing in the Americas.