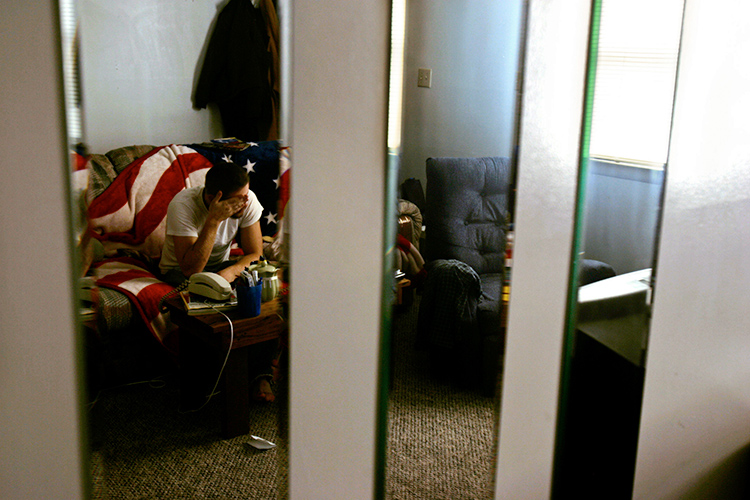 “It’s a story as old as war itself,” Luis Sinco, ’82, tells me as we talk on the phone. “As wars come along, we send kids to do the killing. They come back and they are screwed up.”

Sinco doesn’t hold back, whether it’s getting the best picture possible in the middle of a war zone or telling the story of how post-traumatic stress disorder (PTSD) has crushed the life of a 23-year-old former Marine.

Before placing the call, I wasn’t sure how much the Los Angeles Times photographer wanted to talk about Iraq. Sinco took one assignment in the country shortly after the invasion in 2003 and then returned in 2004. As we chat, I realize that he is not shy at all about his experiences—and the emotions that followed.

Though he had covered the wars in the Balkans and street gangs in L.A., he says nothing prepared him for the siege of Fallujah. Sinco was embedded with a group of Marines fighting insurgents who had months to prepare for the Americans.

“It was one near-death experience after another for five or six days,” he recalls. He kept shooting pictures anyway, sending them via satellite phone during any break in the fighting. His series of war pictures won several awards and was finalist for a Pulitzer Prize.

One image—the weary face of Cpl. James Blake Miller as he puffs on a cigarette—became an icon of the war, appearing on the front pages of more than 150 newspapers. Everyone—including President George W. Bush and CBS Anchor Dan Rather—gushed over the picture of the “Marlboro Marine.”

“This is a warrior with his eyes on the far horizon, scanning for danger,” said Rather. “See it. Study it. Absorb it. Think about it. Then take a deep breath of pride. And if your eyes don’t dampen, you’re a better man or woman than I.”

Sinco has a different view. Once you send out an image over the wire, he says, “the interpretation is way beyond your control. When I took that picture, it was up in the air if we were going to be alive in the next five minutes,” he says. “We didn’t know if we were going to make it to the end of the day.”

Miller and Sinco both made it out of Fallujah alive, and that should have been the end of the tale. We journalists are taught to keep our distance and not become part of the story. “I wanted to put the whole thing behind me and move on,” Sinco confesses. But his editors wanted a follow-up story after Miller was discharged from the Marines a year later due to PTSD.

“My wife said, ‘You are going to be connected to this kid for the rest of your life. Go do the story,’ ” Sinco says. Hanging out with the young man from eastern Kentucky, Sinco found that they had more in common than he first thought. Miller faced a life in the coal mines. The Marines were his escape route. Sinco, a Filipino American who grew up in Olympia, found his high school counselors urging him to forget college and join the Army instead.  The UW was his escape route.

Sinco ignored their advice, and after a year at WSU, transferred to the UW in the late 1970s. “I love the UW,” he says. “It was a more cosmopolitan and diverse environment.” He started taking classes in Asian American history and sociology. “It helped me find out who I was and what the world was all about,” he says of those times. He helped put himself through school by becoming the assistant advertising manager for The Daily. Communication Professor Fendall Yerxa helped him land some internships and free-lance work, but he couldn’t find a full-time job and left for Los Angeles, where he worked his way up the career ladder to eventually join the Times.

Miller’s experience has gone in the opposite direction. Since his discharge, he has suffered from symptoms of PTSD—anger, depression, thoughts of suicide. Sinco became the ex-Marine’s lifeline—taking him to a treatment center in Connecticut, flying to Kentucky when Miller’s wife reported him missing, talking to him for hours on the phone.

Something is troubling me as we near the end of the conversation. I ask Sinco why he doesn’t suffer from PTSD too. “Because I am older. I’ve already had to deal with death and dying. Because I’ve got four kids who count on me. And because I never had to kill anybody. I saw the carnage but I never had to take another man’s life. Once you cross that line, like Blake did, it’s different.”

For Veterans Day 2007, Sinco wrote a two-part article about the Marlboro Marine in the Times. We are printing excerpts in this issue (see “Saving Corporal Miller”). Today, Miller still lives in a trailer behind his father’s house in Kentucky and hangs out with his motorcycle friends, but the Times article has helped make a difference. Sinco says the story has reconnected Miller to his dad and his brothers, who never knew how much the ex-Marine was suffering. “As a family full of men, you don’t talk about your feelings,” Sinco says.

There is also talk of a book project, and Rolling Stone wants to interview Miller about his music; he played his original songs on guitar for the multimedia version of the Times article.

All the buzz has helped both of them cope. “It helped me a lot dealing with the aftermath of the war,” says Sinco. “The excitement will help Blake in some of the ways it has helped me. You feel you are part of something bigger.”