In 1943, a much more serious game came to Husky Stadium 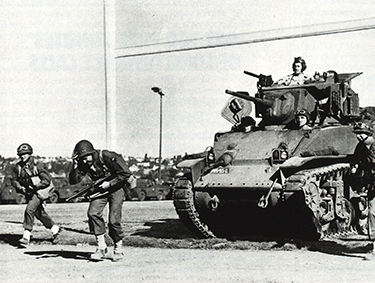 Riflemen appear to be running interference for an M-3 light tank as it rumbles under the goal post at the east end of Husky Stadium during a rehearsal for a 1943 mock combat show. Seattle Times photo.

It was a long way from Iwo Jima, but the UW campus sustained a full-fledged amphibious landing in October 1943 when landing craft, tanks mounted with 37-mm guns, combat jeeps equipped with mortars and machine guns, half-tracks and even giant B-17 Flying Fortresses engaged in mock combat in Husky Stadium.

Under a canopy of protective aircraft, and the cover of darkness, troops stormed ashore from landing craft in the ship canal and rushed into the open east end of the stadium. Dubbed the “Seattle Attack,” the U.S. Army mounted the spectacle as part of a Boeing recruitment drive.

The 1,500 invading soldiers shot off so much blank ammunition fire and land mines that smoke sometimes blocked the view across the stadium. Aerial stunts involved fighter planes and the Boeing-built Flying Fortresses.

The stadium show was a one-night spectacle but elsewhere on campus the war made significant changes. UW President Lee Paul Sieg struck a serious note in his 1942 welcome to students. “If there are either men or women here who do not see that these days are days for preparation for war they are, bluntly, not wanted,” he intoned.

The campus blossomed in Army khaki and Navy blue as a series of military training programs came here. In mid-1943 the military took over 12 to 15 fraternity houses for housing. Co-eds had been moved out of campus dormitories earlier that year and the Commons cafeteria was closed to civilians in July. Student enrollment exceeded expectations when it topped 6,000 in fall 1943—1,600 Army and Navy trainees. By order of the Interfraternity Council, summer rush was eliminated.

But the war didn’t cancel everything: The annual beard-growing contest was held in 1943 as scheduled. The Husky football team went to the Rose Bowl, though three starters were snapped up by the Marines in November. (The team lost to USC 29-0.) Those who were here during the war will never forget it. Their memoires will be rekindled during Homecoming in October when the UW Alumni Association sponsors the 50-Year Golden “W” Reunion for the Class of 1943.