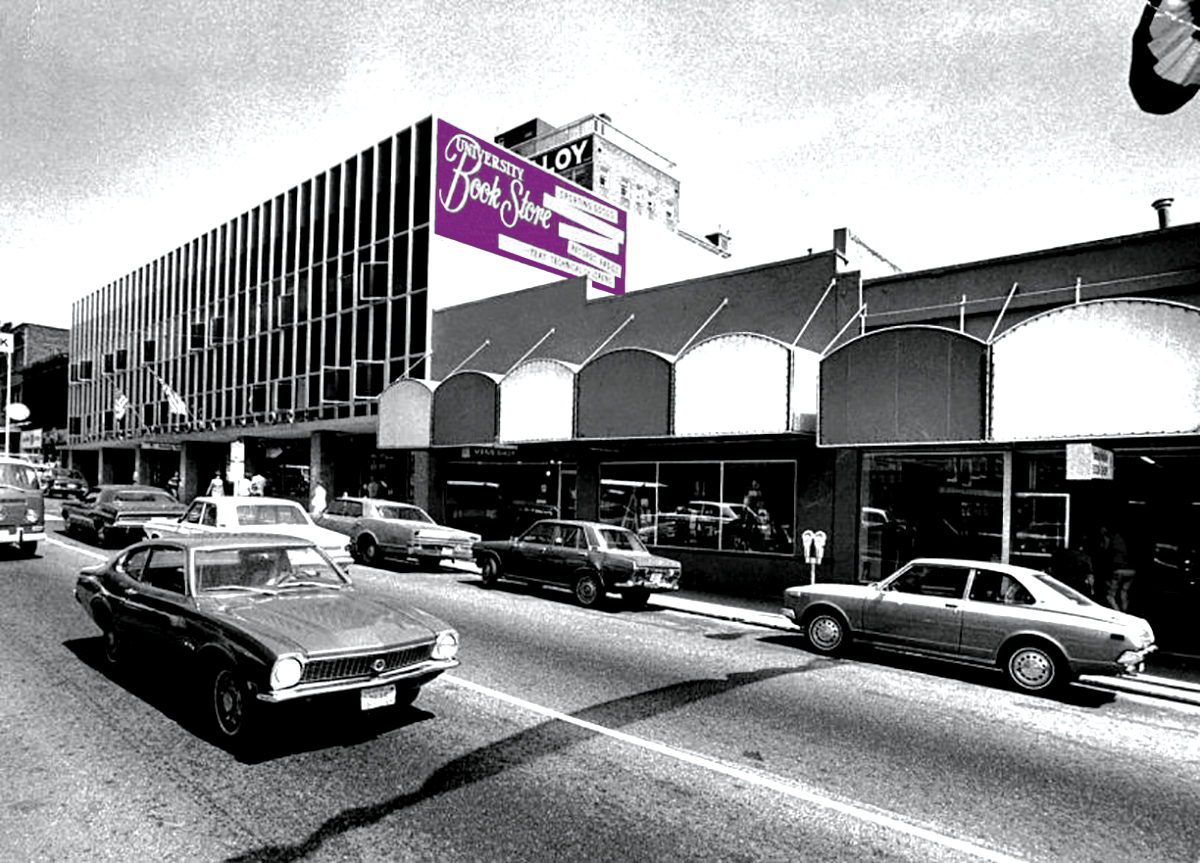 The University Book Store on the Ave in the 1970s.

As the novel coronavirus spread through King County and employees across the University of Washington were sent home, University Book Store CEO Louise Little was in her office on the Ave, just like any other day. Along with 40 of her colleagues, Little, ’81, works at a place identified as essential by the state, and that designation is hard to dispute: While thousands of students were missing from campus, they still needed books for spring quarter.

Instead of waiting in a winding line at the bottom floor of the bookstore, students now obtain their textbooks by mail or digital download. For an independent bookseller built on in-person business, that took some getting used to. “We have to process, pick, pack and ship every order,” says Little, and it’s a big deal for a small staff. But the bookstore adapted on the fly, keeping a CDC-sanctioned distance between themselves and wiping down surfaces as they worked. It’s been good practice for summer quarter, which will also be online.

It’s quite a way to mark the bookstore’s 120th anniversary. Opened by two students in 1900, operating out of a coat closet next to the President’s Office in Denny Hall, the shop relocated to the basement in 1908. But by 1924, the fire marshal kicked the organization off campus, flagging its setup as unsafe, and The bookstore moved into an old billiards hall on the Ave. “Sometimes I don’t know where the University Book Store ends and the University begins,” says Little. “We are part of the fabric of the campus culture. Everyone has a bookstore memory.”

An early bookstore flier declares: “As this is purely a co-operative concern, run by students for their own benefit, it expects the support of all loyal students.” The student population: 514.

The bookstore makes more than $50,000 in sales for the first time, with a profit of nearly $5,000. This data is made public and promoted in advertisements at the time.

Longtime bookstore manager Percy Dearle resigns in order to start his own shop, “Dearle’s Student Supply,” on the Ave. He often slashes prices to undercut his old employer, allegedly once claiming that “he would live on the beach and eat clams to undersell the bookstore.”

It looks like ASUW will default on bonds that it issued to build Hec Ed, so the bookstore incorporates and takes out loans. That saves ASUW’s skin, and saves the University Book Store from potentially being sold off by the cash-strapped ASUW.

The world is at war, but Duke Ellington stops by the bookstore and plays a baby grand piano. Life on the Ave is beautiful—at least for a song or two.

The bookstore ranks second only to the Harvard Book Store in sales.

President Charles E. Odegaard reorganizes campus and many of its departments, and The bookstore lands a new status: a for-profit organization that isn’t part of the University. That remains so today, but the board of directors features students, faculty and staff.

The Vietnam War continues to loom over life in America, and the UW student body grows to more than 33,000—nearly double that of the previous decade. (The median age of a U.S. soldier killed in the war is 20.) As new students arrive, The bookstore more than doubles its volume, now up to $5.4 million.

The Book Store opens a Bellevue branch, bringing 60,000 titles and an intimate UW connection to the Eastside. The store closed 30 years later, in 2017, due to the changing retail landscape.

UW pounds Michigan to win the Rose Bowl. Husky gear becomes even more in style, representing 10% of all store sales.

Former President Jimmy Carter returns to the book store for his fourth visit (he would have a fifth in 2019). The bookstore has also welcomed Bill, Hillary and Chelsea Clinton, Sens. Bernie Sanders and Elizabeth Warren, and Supreme Court Justice Sonia Sotomayor.

Louise Little, ’81, who started at the bookstore as a temporary cashier in 1980, becomes the store’s first female CEO.

As much of the University goes remote due to coronavirus, the bookstore continues to operate online in order to spread knowledge and joy to students across the UW. It announces a reopening to the public on July 14.