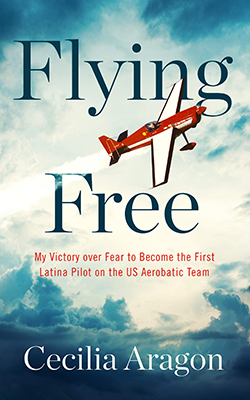 Cecilia Aragon is a woman of many firsts. She is a child of a first-generation immigrant family (her father is from Chile and her mother from the Philippines). She is the first Latina full professor in the College of Engineering. And she’s the first Latina on the U.S. Unlimited Aerobatic Team.

Between 1991 and 1994, Aragon competed in the “Olympics” of modern aviation—performing complex loops, rolls and flips in her Sabre 320—and earned bronze medals in both the US National and World Aerobatic Championships. Her first flight, in a cramped, two-passenger plane was a turning point in her life. Learning to fly opened her up to the rewards of taking risk. In addition to becoming a professional pilot, she has since excelled in the fields of data and computer science, and has won a Fulbright and a Presidential Early Career Award for Scientists and Engineers from President Obama.

Last fall, Aragon’s memoir, “Flying Free: My Victory Over Fear to Become the First Latina Pilot on the US Aerobatic Team,” came out. It is for “anybody who has been discouraged all their life,” she says. Aragon spoke with science writer Amanda Heidt about her love of flight, her research and the challenges women in STEM now face.

What was the impetus for this book?

I was an extremely fearful child. I was afraid of heights. I was afraid of climbing up ladders. I was afraid of shaking hands with a stranger. I also had been told my whole life, “Girls can’t do science.” “Girls aren’t good at math.” “You shouldn’t be in college taking up a space.” People actually said things like this to me. Then when I was 25, a friend offered me a ride in a small airplane. My first thought was, “There’s no way I can do this.” But then I thought, “It’s time to make a change, because the way I’ve been living has been making my life narrower and narrower. If I don’t face my fears, I will never do anything I want to.”

I really thought I wasn’t going to make it. … But then we took off. We lifted off over the San Francisco Bay and the sun was sparkling on the blue waters, and the Golden Gate Bridge was gleaming. I thought “This is the most beautiful sight I have ever seen.” My friend took me out over the California coast so low that you could see the waves crashing against the cliffs. It was gorgeous. It felt like the sky was calling to me. When we got back on the ground, I signed up for flying lessons.

What’s your favorite kind of plane?

The Saber. What I needed was a plane built for a 100-pound, 5’2” person. The Saber was built for somebody else, but eventually I bought the project and modified it. It was built specifically for me to win the World Aerobatic Championships. My instructor gave me a wonderful metaphor for being a woman in this world, especially a Latina in STEM. He said, “If the cockpit is not set up for you, you will have trouble flying, and you will think it’s your fault. But the problem is that your environment is not set up for you.”

Did the confidence that you gained from flying bleed into other parts of your life?

There are many things in my life, like getting my Ph.D., which I thought were impossible. I dropped out of my Ph.D. program before I learned to fly. Learning to fly gave me the courage to go back. Once you have done something that seems impossible and once you have faced your fear, you can always remember that.

Can you talk about your research?

Human-centered data science takes a stance against this myth of data being objective and unbiased and somehow better than humans. Humans have biases, and computers magnify those biases. In today’s data science, it’s very often data that’s produced by humans to describe humans. Human-centered data science means that as you are studying this data, you constantly keep in mind that there is no such thing as pure objectivity. All data is really human filtered. By centering the human in your analysis of the data, you are doing the right thing to be ethical about the data.

Why did now feel like the time to write your book?

I knew I wanted to tell the story in 1999, but writing a memoir is really hard, and I wanted to do it myself. So it took all these years to really learn how to write a memoir. I took classes. I got a certificate in memoir writing. I got an MFA in creative writing. One day I sat down and wrote an outline of 40 scenes. Over the next three months, I just wrote. I have this full-time job, I have a family, so I got up really early. It just poured out of me.