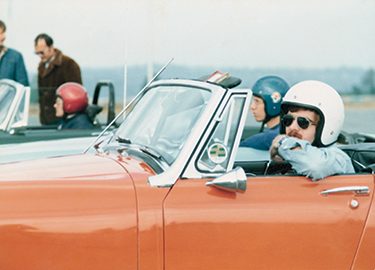 When I was in college, I had a friend named Fred who owned a sexy English sports car — a white Triumph Spitfire.

At least, I assumed he owned one. I almost never saw it, since it was sequestered away in a rented garage most of the time. The fact is, Fred was always tinkering with it because it never ran. I only saw him once actually driving it on the street in the four years I knew him.

Triumphs, MGs, Austin-Healeys — whatever English sports car you drove in that era (late ’60s and early ’70s) was notorious for breaking down all the time. You really had to love repairing cars to get any satisfaction out of them.

“You don’t get a car when you buy an English sports car, you get a hobby,” says a man who admits he was once a “sports car nut” — incoming President Mark Emmert, ’75. The new UW leader not only owned an Austin-Healey Sprite when he was a UW student, but even worked in a store on the Ave. that specialized in foreign auto parts.” Mark had a sports car addiction,” says his college roommate, Jerry Herting, ’75, ’86. “That Austin-Healey was his pride and joy.”

Emmert would grab whoever was willing to ride with him on road rallies and time trials. His cousin, Frank Spear, ’79, ’85, recalls many times when they’d go to the old Seattle International Raceway for autocross races. Drivers tried to get the best time while negotiating a twisting course marked out with traffic cones or old tires. Emmert would often have one of the best scores.

The car might have been his pride and joy, but he was willing to share it, adds another roommate, Randy Grab, ’76. “If I had a date and wanted to impress the girl, he would loan me his car. Of course, you had to cold choke it to get it to start, which was a real trick.”

But, Grab adds, the car ran fine once it started. “It was Mark’s passion to keep it in good shape,” he recalls. But there came a time when the passion had to end. “One of my great decisions when I was finishing up at the UW was to go off to graduate school or get serious about racing cars. I’m still not sure I made the right decision,” Emmert jokes.

Emmert had to sell the car to help finance his first year of graduate school at the Syracuse University. “He loved tinkering with it,” says his cousin. “It was a big deal for him to have to give it up.”

Three decades after he said good-bye to his Sprite, Emmert will be taking the wheel of a huge educational enterprise that has hit some potholes recently in its sports program and academic medical center.

By some accounts the UW needs a tune-up-or maybe an engine rebuild. If so, the UW is in very good hands. Just as Emmert had a passion to keep his sport car running, he has a passion for fixing large organizations. Both the University of Connecticut at Storrs and Louisiana State University are better institutions because of Emmert’s expert steering.

Our new president is known for negotiating obstacle courses and set winning times. He actually enjoys tinkering with a complicated, temperamental machine-and he is able to get it to run smoothly. The UW may be his most challenging assignment, but without a doubt, it’s going to be exciting times on the road ahead.