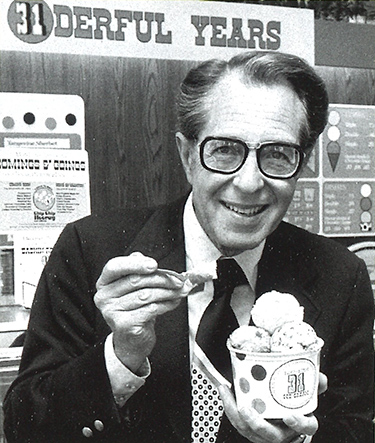 Irvine (Irv) Robbins, ’40, who as co-founder of Baskin-Robbins introduced America to a host of unusual ice cream flavors, died May 5 in Rancho Mirage, Calif. He was 90.

As a teenager, Robbins worked in his father’s Tacoma ice cream shop. He recalled that he often “finished a day’s work happy” and wanted that same feeling when he started his own business.

Robbins, who earned a bachelor’s degree in political science from the UW in 1940, opened his first ice cream store in California in 1945. He teamed up with brother-in-law and business partner Burton Baskin in 1948 to open six stores. The chain became known as Baskin-Robbins in 1953. His motto: “We sell fun, not just ice cream.”

Today, Baskin-Robbins is the world’s largest chain of specialty shops with more than 5,800 stores in 34 countries.