It may be only once a year, but Denny Bell keeps ringing 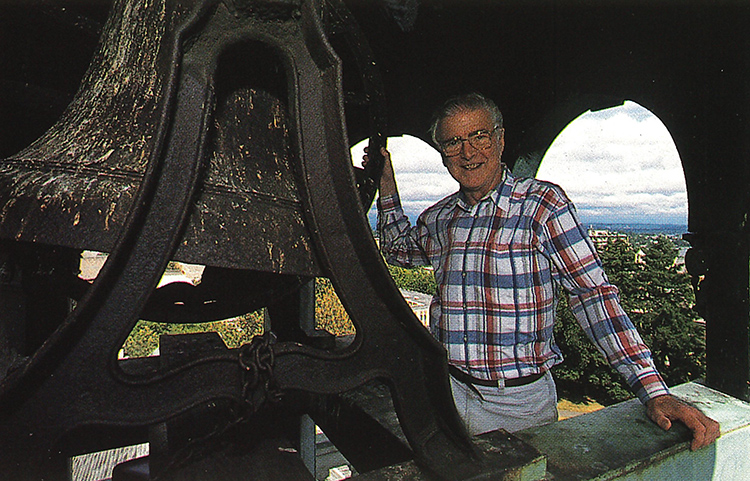 Thy silver tongue is silent now
Invention steals away thy voice.
Thy golden chime has oft arc now
Called many laggards to the tryst.
—The Daily, Aug. 7, 1928

For 364 days a year, the silver tongue is silent. The bell atop Denny Hall sits quietly in its belfry, peering out over the sprawling campus, its place in Seattle’s and the University’s history secure—but often overlooked.

One of two relics brought to the current campus (along with the Sylvan Theater columns) from the Territorial University site in downtown Seattle, it is recognized only once a year, when Brewster Denny, ’45, great grandson of Seattle founder Arthur Denny and a professor emeritus of public affairs, climbs the steps up to the belfry to ring it before the Homecoming football game.

It’s quite a comedown for a bell whose part in Seattle’s early history is considered equivalent to the role the Liberty Bell played in our nation’s history.

In 1861, when the Territorial University of Washington was established downtown, it was necessary to have a bell to assemble the classes. The bell was purchased during the Civil War for $368, and brought from Troy, N.Y., around Cape Horn to Seattle. On March 19, 1862, it rang for the first time. 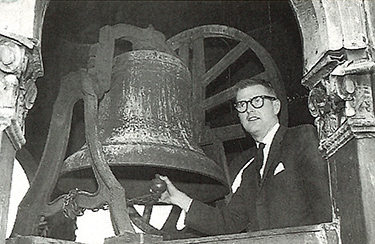 A much younger Brewster Denny poses with the bell in this 1960s photo by James Sneddon.

While it signaled the start of classes every day, it also served the community. It rang during the 1886 riots against Chinese immigrants, the Great Seattle Fire of 1899, and to commemorate weddings and deaths of prominent people, such as Arthur Denny and Mrs. Dexter Horton. Its tones—which could be heard as far away as Port Madison 14 miles across the Sound, or as far south as Renton—were frequently used to alert ships coming into foggy Elliott Bay.

When the campus moved from downtown, the bell came too. Hans K. Jenson, a pioneer of the University District, hauled the 400-pound bell via wagon train, getting stuck in the mud several times.

In 1895, it was placed in the belfry atop what was then called the Administration Building but is now called Denny Hall. It became a target of pranksters, who would scale the series of ladders in Denny Hall to ring it or purloin the clapper.

But when the Blethen Chimes arrived in 1912, the bell’s near-death knell was sounded. The chimes took over the bell’s duties, and from 1912-1919, the Denny Bell sat silently in its cupola. It took a suggestion from a Grays Harbor student to start the tradition of ringing the bell once a year, at Homecoming.

In 1961, Brewster Denny joined with the late Jack Nichols to become the “Denny Bell Committee,” which meant they would ring it every year. Once, they used a lead pipe to clang the bell—the clapper had been stolen.

The bell was silent during the Vietnam War, when Homecoming was canceled. Denny has rung the bell on rare other occasions, such as when President John F. Kennedy visited campus in 1961, and in 1963, when Kennedy was assassinated.

“I still get a kick out of ringing the bell,” says Denny, who has been doing it every year since 1961 and will do it again on Oct. 28 before the Huskies face USC.