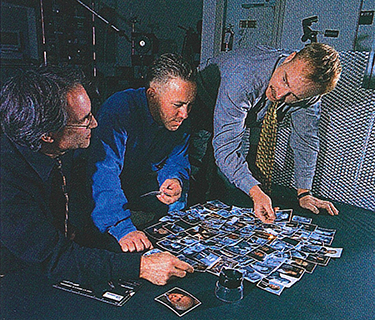 Sometime in the year 2099, an editorial assistant will be combing through the University of Washington database and come across a virtual copy of the UW alumni magazine from the year 1999.

She will download the copy into the microprocessor implanted in her brain and turn the virtual pages of the issue with “100 Alumni of the Century” on the cover. A smile will slowly break on her face as she looks over the list of names. “What an absurd list,” she will think. “Who ARE these people? What is NBC?” she will mutter. “They missed some of the most important alumni of their era. How could they be so blind?”

It’s not that we didn’t try to be comprehensive. For 10 years, as editor of this magazine, I have been compiling files about famous UW alumni with the help of Associate Editor Jon Marmor. When it came to putting together our last issue of the century, it seemed fitting to run a list of 100 famous, influential or fascinating people based on that information.

But the raw data included more than 200 “newsmakers.” To keep the list under control, I set some broad criteria. First, the former student had to attend and/or graduate in the 20th century. Second, his/her impact had to be felt beyond the boundaries of the campus. Third, there should be a diversity of alumni from all eras, backgrounds and professions. I didn’t want a list of 100 actors and professional athletes, although you’ll find a healthy sample of both.

There are many stories I could tell about the process, such as Jon calling NBC and no one at the switchboard recognizing the name “Chet Huntley.” Or striking the name of a discoverer of the neutrino when we found out he was an alumnus of Washington University in St. Louis instead of the UW. Or tracking down a photo of the original Brothers Four thanks to the Seattle Times.

While Jon and I made the final cut, we called upon veteran alumni, faculty and staff to screen the names. It is fair to say the list would not exist with their help. They include Columns Advisory Committee Chair Donna DeShazo, former UWAA Associate Director Nancy Nash, History Professor Emeritus Thomas Pressly, retired Columns Associate Editor Jean Reichenbach, Office of News and Information Director Bob Roseth, Office of Development Researcher Roger Tang, Office of Development Writer Antoinette Wills, and Arts and Sciences Associate Dean David Wu. A special thanks goes to retired Seattle Times reporter and columnist Dick Larsen, who provided expert advice about the list and even helped write brief descriptions of some alumni.

What you will find beginning on page 14 is not a definitive list of the “top” or the “most important” alumni of the century. It’s our informal attempt at sharing 100 of the most famous, fascinating and influential people. I’m sure that you could add a few (and subtract a few) from what you see. If you want to try, send an e-mail using the link below.

As for our editorial assistant in 2099, she is still in the future laughing at our selections-at least until she gets to Dawn Wells, ’60, and stops in surprise. “Gee, I didn’t know Mary Ann from Gilligan’s Island went to the UW,” she will exclaim. Even 100 years from now, there will still be re-runs.