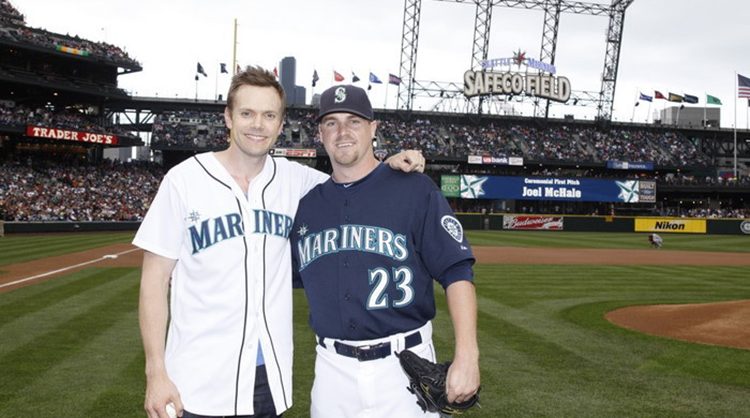 Standing 6 foot 4, Joel McHale is a tall man in Hollywood. And now, he’s a big man in Tinseltown. With two hit TV shows (Community on NBC and The Soup on E! Entertainment) and two movies coming out in 2011 (What’s Your Number? with fellow Husky Anna Faris, ’96, and The Big Year, with Steve Martin and Dianne Wiest), McHale, 38, is one of the hottest Huskies in Hollywood.

After earning his B.A. in history in 1995, McHale enrolled in The Professional Actor Training Program in the School of Drama. He graduated with his master’s in 2000, during which he did an internship for the classic local TV show Almost Live!. McHale—who with his wife, Sarah, ’00, has two children—is from a Husky family. His grandparents attended the UW, and McHale always talks about the UW and Seattle when he does guest appearances on radio and TV shows.

Do you see other Huskies in Hollywood?
I did a movie last month with Anna Faris. At Jenna Fischer’s wedding, I got to talk with [former UW student] Rainn Wilson. We talked a lot about our time at the U-Dub.

You played Husky football?
I was recruited to be on crew, but I didn’t like it. Later on, I decided to try football. I was on the scout team behind Ernie Conwell and Mark Bruener [both played in the NFL]. I made our defense look great because of the way I would get laid out by them. I had a great time playing football, but after two years, I quit because I wanted to act. I also didn’t want my knee turned inside out. It was a weird experience not to be killed. 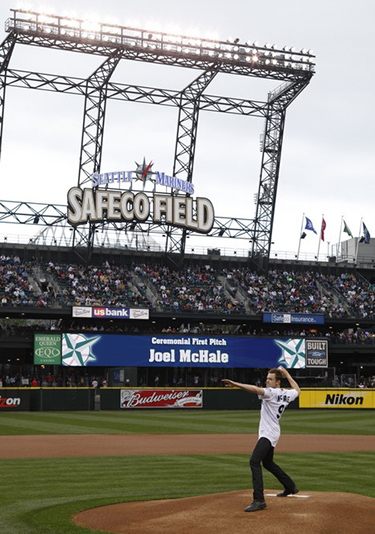 McHale throws out the first pitch at a Mariners game.

Why did you get your bachelor’s degree in history?
It was a subject I would pay attention to. And I got to take classes from Professor [Emeritus] Jon Bridgman. He was the best history professor ever. Besides, everyone should know this stuff. I feel that way about math, but I was so bad at it.

What was grad school like?
Graduate school in acting was 24/7. The hours were very long but it was wonderful. The acting program was like a science lab; you got to try everything and learn how to improve. And I worked with the very best teachers. [Professor] Jon Jory is a giant in American theater. I got a chance to learn from the best. I love the UW and couldn’t be happier that I went there.

Most people know you through The Soup and Community. But you also do drama?
I enjoy both comedy and serious acting. In graduate school, I wanted to learn to do Shakespeare and the classics so I could be well-rounded. I didn’t make a decision to go into comedy, I just gravitated toward it. Actually, when I first moved to Los Angeles, the first roles I landed were dramatic guest-star roles.

Do you write your comedy material?
I write some of my jokes for The Soup, although we have a staff of writers on that show. I don’t write for Community. The writers for that show are amazing, and we spend 70-90 hours a week on it in full production, so I wouldn’t have any time to write even if I wanted to.

What is it like working with Chevy Chase on Community?
It’s crazy. He’s someone I grew up admiring. I have been so fortunate to get to learn from people like Chevy Chase and from Pat Cashman on Almost Live!.

In June, you got to throw out the first pitch at a Mariners game. What was that like?
I’ve been a longtime Mariners fan so it was a big thrill. But a bigger thrill was not horribly embarrassing myself by throwing the ball in the dirt.

What does the future hold for you?
My focus right now is on doing Community and The Soup and seeing if I can get some more movie roles. But one dream I have is to act in a play at the Rep [Seattle Repertory Theatre]. That would be great.