He was everyone's favorite history professor. 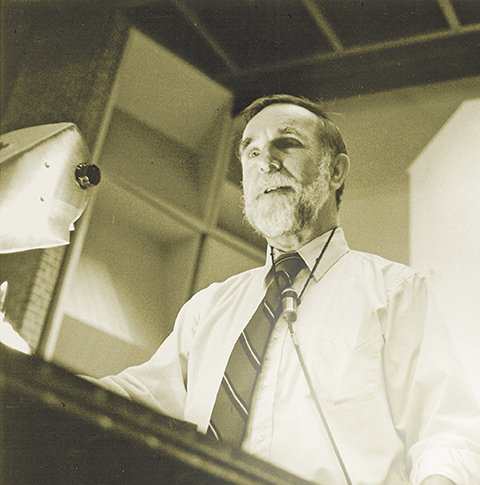 In the 1950 film La Ronde, the narrator states: “I adore the past. It’s so much more restful than the present and so much more certain than the future.” History Professor Jon Bridgman said that this scene captured his perspective. He adored the past, and for more than five decades he infused thousands of University of Washington students with this adoration.

His spellbinding lectures captured the spectacle, folly and absurdity of history. He took us beyond dates and cold facts with presentations such as the music of World War I, the science of the atom bomb, the bravery of battlefield nurses, and the aesthetics of Greek architecture. Despite numerous accolades, Professor Bridgman was always self-effacing. Indeed, he would often show a film on the last day of class so he could depart early and avoid the inevitable end-of-course applause.

But for professors Arthur Ferrill and Donald Treadgold, his first book, Revolt of the Hereros, may never have seen print. While he was in Hawaii, they submitted his manuscript to a publisher. As an undergraduate in the late 1960s, I discovered Professor Bridgman in European history courses. His impassioned storytelling complemented by moving books and films fueled my curiosity and study. During those turbulent days, he also was deeply concerned for the safety of his students as clouds of tear gas wafted over the UW campus.

I helped Professor Bridgman with a research project in recent years. I’m grateful for all he taught me about innovative research and exploring historical problems. He also shared stories about his life. During high school, he used his earnings from odd jobs to buy the works of great historians such as Thucydides and Gibbon.

In early 2015, my wife Betsy and I attended Professor Bridgman’s final lectures on the Golden Age of Hollywood. Despite challenging health problems, his enthusiasm and attention to students never waned. He leaves behind a profound and brilliant legacy.

Robin Lindley, ’71, ’74, is a Seattle attorney and features editor of the History News Network.