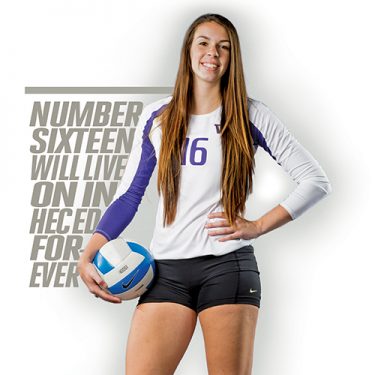 We all look up to Krista Vansant, and not just because she stands 6-foot-2.

The best volleyball player in UW history had her number 16 jersey retired before the Nov. 8 upset of Stanford. “This means the world to me,” says Vansant, a two-time national player of the year who is now a program assistant for the Husky volleyball team.

It was a particular thrill to be honored before the Stanford match because her Huskies knocked off the Cardinal, then ranked No. 1, on her senior night in 2015 before a sold-out home crowd. “That was one of my favorite matches ever,” she recalls.

An outside hitter, Vansant, ’15, also hit the books as an Academic All-American. She led Team USA to gold at the 2015 Pan Am Cup, was an alternate for the U.S. Olympic team at the 2016 Rio Games and played professionally in Switzerland. Then she decided to return to Seattle. “It’s great being back.”