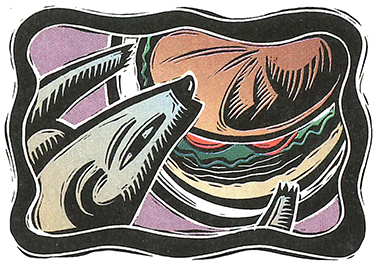 UW scientists have produced a genetic mutation that keeps laboratory mice thin even on a very high-fat diet. The discovery may lead to the development of new types of obesity drugs.

“On a diet with 50 percent of its calories from fat, something akin to the typical fast-food meal, the mice stay thin,” says Pharmacology Professor G. Stanley McKnight, principal investigator on the study, published in the Aug. 15 issue of Nature.

McKnight and his colleagues induced a genetic mutation in the mice that lowers the setpoint at which one type of fat cell produces heat, thus forcing the breakdown of other fat tis­sue. “The mutation resets their ther­mostats,” says McKnight. “They run a slight fever and have a slightly higher metabolism.”

The experimental mice appear to be healthy and their appetites are as good or better than the appetites of normal mice. “While we can’t create mutations in humans to achieve these effects, it may be possible to create small­-molecule drugs that, like the mutation, would act within fat cells,” says McKnight.