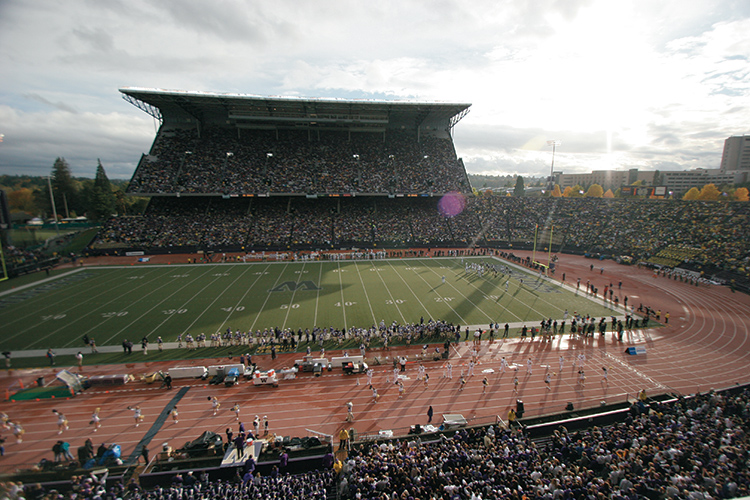 State lawmakers are considering a plan to help finance the renovation of Husky Stadium by tapping funds currently used to pay for professional stadiums in King County. A decision is expected before they adjourn March 12.

On Jan. 17, former Gov. Dan Evans, ’48, ’49, and Interim Athletic Director Scott Woodward presented a plan to the Board of Regents for a $300 million renovation of Husky Stadium, with half the amount coming from private funding and the other from public sources.

Evans, who chairs the stadium renovation committee, says public financing “would not require new taxes. This is existing revenue now being set aside for professional sports.”

Evans and Woodward told the regents they plan to raise the other $150 million through the sale of seat licenses and private gifts. This 50–50 match is more generous than the public-to-private ratios for Safeco Field (72–28) or Qwest Field (75–25), they noted.

Husky Stadium is the largest stadium in the Pacific Northwest and hosts more than 50 non-athletic events that annually attract more than 70,000 people. Evans told the regents that after the renovation, the UW could expand its community outreach, including perhaps a Friday night “game of the week” for local high school football teams.

According to a study by Geography Professor William Beyers, ’62, ’67, the UW athletic program supports 2,558 jobs in the state, generates $211 million in annual sales to businesses and creates about $83 million in annual labor income. Because many college football fans like to travel with their teams, the UW football program attracts more out-of-state revenue per game (what economists call “new money”) than the Mariners or Seahawks.

Few contest that the Northwest icon—named by the Sporting News as the “best setting” in the nation to watch college football—is beginning to fall apart. The concrete poured in 1920 for the stadium’s original lower bowl is crumbling. The 1920s stairways don’t meet standards set by the Americans with Disabilities Act and there are only two elevators for a stadium that holds 72,500.

Evans and Woodward point out that the public revenue would finance preservation, renewal and maintenance, while the private revenue would cover upgrades and new amenities. The seating capacity would not change.

Public funds would cover:
• Replacing the lower bowl built in 1920, including a new west end that is closer to the field.
• Upgrading the stadium to conform to the Americans with Disabilities Act, including more elevators and ramps.
• Utility and seismic upgrades.

Private funding would cover:
• Taking out the track, lowering the level of the playing field and bringing the fans closer to the action. The track would probably go around the UW’s soccer field near the IMA Building.
• Creating a premium seating section in the south stands similar to the Tyee seating in the north stands. There are no luxury boxes in the plan, Evans says.
• Expanding restrooms and concession areas plus upgrading the sound system.
If the plan is approved, construction would start at the end of the 2008 football season. The Huskies would play in Qwest Field for the 2009 season and return to a renovated Husky Stadium in 2010. This would put the renovation on a fast track, avoiding major conflicts with the construction of a light rail station for Sound Transit located next to the stadium.

“This is a huge problem,” Evans says. “This is the minimum that we ought to be doing for a first-rate place.”