‘Legend’ has it: Columns celebrates a century 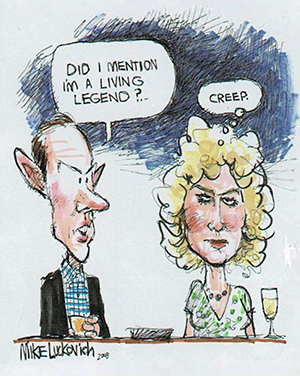 With this issue, we celebrate the 100th anniversary of the UW’s alumni magazine. If you’ve been reading us from the beginning, well, congratulations on being the oldest living person. If not, you can turn to page 63 for a sense of what that first edition of Columns’ predecessor, the Washington Alumnus, was like.

In planning this centennial issue, we knew a little celebration was in order. We also knew we’d like to approach it with the same spirit the editors brought to chat first Alumnus: forward-looking and outward-looking. They foresaw a University whose importance to the region, and to the world, would only continue to grow. So do we.

So rather than recounting our Rose Bowl victories or honoring past presidents, we decided to celebrate living alumni who have made or are making their mark outside the University’s bounds—the UW’s “living legends.” Our top priority then became finding a better headline than “Living Legends.” We always try—though not always successfully—to avoid clichés here at Columns, and an issue dedicated to the new and the now seemed like a good place to redouble that effort.

But useful words have a way of hanging around; that’s how they become cliches. Even after we’d named the piece “Our Wondrous One Hundred,” we found ourselves referring to it as the “living legends” feature. It proved a helpful shorthand way of describing the project to the members of our selection committee. And keeping the word “legends” in the conversation helped us remind ourselves of what we were shooting for—not the alumni with the most power or money or the most vaunted resumes, but those with the most remarkable stories. Telling the UW’s stories is what Columns has always been about, and we don’t foresee chat changing in our second century.

This issue also sees the departure of Tom Griffin, who spent 27 years at the University of Washington, including the past 19 as editor of Columns. That means he was at the helm for nearly one-fifth of the magazine’s 100-year history. Wow.

A Wisconsin native and graduate of chat ocher UW (the one in Madison), Tom made Columns into one of the most admired alumni magazines in the nation. There were—quite literally—more awards in his office than there was space to display them. We wish Tom nothing but the best as he embarks on his UW retirement. He is as caring, supportive and inspiring a colleague as one could want. He’s also a walking encyclopedia of UW information, a born writer and a first-rate editor. Thank you, Tom Griffin, for two distinguished decades.

Jon Marmor and Eric McHenry are the co-editors of Columns.