Like any hero, Harry the Husky has an origin story 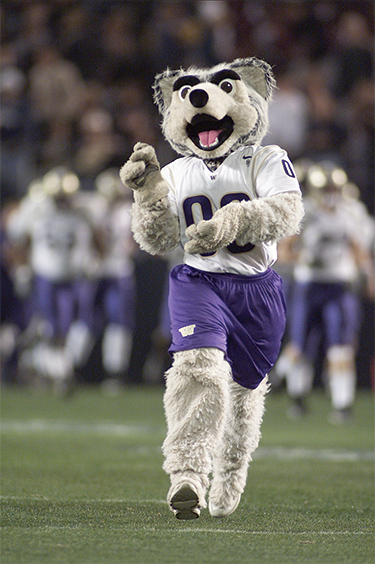 He commands attention, changes appearance in the blink of an eye and must keep his true identity top-secret. Superman? Nope—think hairier. It’s the man dancing behind the bright purple “00” jersey, making Husky fans young and old burst into smiles: Harry the Husky.

The UW hasn’t always had a comical character running around Husky Stadium and entertaining students and alumni at University functions. Though live canines have been official UW mascots for decades, Harry, known simply as “The Husky Dawg” at the time, wasn’t introduced until the 1995-96 school year.

A character that could interact with fans and represent the University both on and off campus was the brainchild of Band Director Brad McDavid, former Athletics Director Barbara Hedges and the Husky Fever support group. After looking through numerous designs from costume companies, the team settled on the goofy-grinned Harry. “The feeling was that the live mascots were more associated with the football program, so we wanted to create something that could be utilized at a lot of other department events,” McDavid says.

Though his identity was kept a secret at the time, communication major Lee Harris, ’00, scored the role and shaped the mascot Harry would become. With nobody to look back at for guidance, Harris and his advisors made up the rules as they went. In addition to developing the energetic personality fans know today, Harris laid out the privacy rules current mascots uphold—during a student’s years as Harry, his or her true identity remains strictly confidential.

Even though having a character mascot was a new concept at the UW, an official screening process was essential. “The original tryouts were quite interesting,” Harris says. “Since the University didn’t actually have the Harry costume at that time, we performed in the Seahawks’ mascot costume.”

The mascot’s name has changed over the years—The Husky Dawg became Harry the Husky after fans submitted suggestions during the 1997 basketball season. But Harry’s look is not far from what it was when Harris first took the field. He quickly learned that staying in character while decked in Harry’s attire wasn’t as simple as it looked.

“Wearing the costume is something that everyone should do, because it will cause an appreciation of what truly goes into making the character come to life,” he says. “The suit itself is not all that heavy, but when you are running around in it for three hours at a basketball game or upwards of seven hours on a football game day, it becomes quite a lot of work. During an average football game, I would lose between seven and 10 pounds of water weight.”

The worst part of playing Harry came after the events themselves. Each night, Harris hand-washed the entire costume in the shower—a 30- to 45-minute ordeal.

Even with the few downsides, Harris would grab the costume and do it all again in a heartbeat. “The best part was watching the kids light up whenever they saw you,” he says. “No matter how tired you were, a smiling kid could always re-energize you.”

The image of thousands of purple-clad fans screaming as he ran out through the tunnel in Husky Stadium alongside the football team is still crystal-clear for Harris, who is regional manager of the Boeing Employees Credit Union in Tukwila. “The energy that stadium had in the mid-1990s was amazing,” Harris says. “Leading the team out onto the field was something I will never forget.”