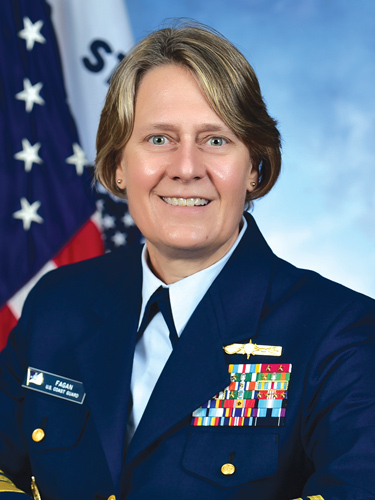 Yet another historic achievement for women connected to the University of Washington took place in April. That’s when Admiral Linda Fagan, ’00, became the first woman nominated to serve as commandant of the Coast Guard. A graduate of the School of Marine and Environmental Affairs in the UW College of the Environment, Fagan becomes the first woman to head a U.S. armed service.

This news really didn’t come as a surprise; just a year ago, she became the first woman named the Coast Guard’s vice commandant and the first woman to be promoted to four stars. “Admiral Fagan’s nomination will inspire generations of American women to strive to serve at the highest level in the Armed Forces,” said Sen. Maria Cantwell (D-Washington).

Fagan is a graduate of the U.S. Coast Guard Academy. She went on to earn her master’s in marine affairs from the UW and a master’s in national security strategy from the National Defense University. She served as the Coast Guard’s Pacific Area commander before she was appointed last year as the service’s vice commandant.

Fagan joins a list of women with UW connections to make history. The first woman directors of the National Science Foundation and NOAA are alumni.

Alumnae have an impressive legacy of being the first in their field. The nomination of Linda Fagan, ’00, to become commandant of the U.S. Coast Guard—the first woman to head a U.S. armed service—is just the latest. Here’s a look at several others.

Linda Buck, ’75, became the first alumna to receive the Nobel Prize. Her award was in Physiology or Medicine.

Lynn Colella, ’72, was a superstar swimmer who was the first UW woman to win an Olympic medal—a silver in the 200 butterfly in the 1972 Munich Olympics.

Rita R. Colwell, ’61, became the first woman director of the National Science Foundation. She served in that role from 1998 to 2004. She holds a Ph.D. in oceanography from the UW College of the Environment.

Christine Gregoire, ’69, ’71, was the first woman to be elected attorney general in the state of Washington.

Jane Lubchenco, ’71, was the first woman administrator of the National Oceanographic and Atmospheric Administration. She served in that role from 2009 to 2013. She earned a master’s in zoology from the UW College of Arts & Sciences.

Dolores Sibonga, ’52, ’73, was the first Filipina American woman admitted to the Washington state bar and became the first woman of color to sit on the Seattle City Council.