Linda Fagan, ’00, to achieve a historical first for Coast Guard 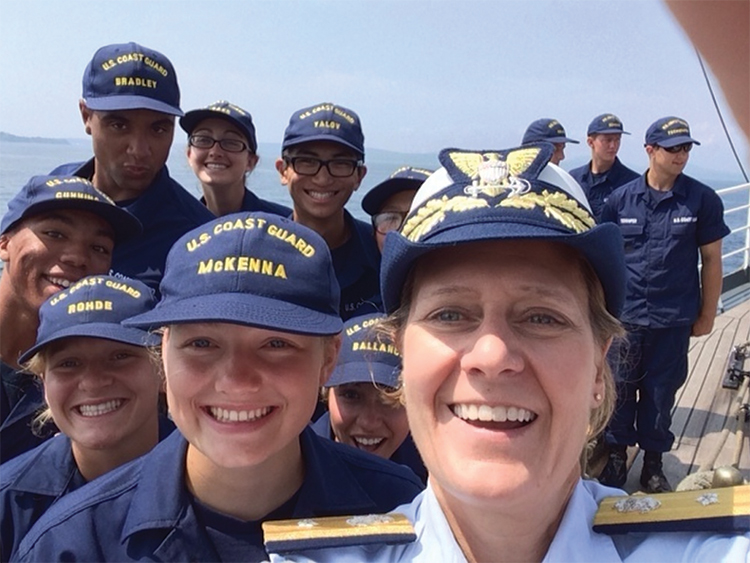 For the past two years, Fagan has served as the Coast Guard’s Pacific Area Commander, overseeing all Coast Guard missions from the Rocky Mountains to the waters off the East Coast of Africa. Fagan also serves as commander of Defense Force West and provides Coast Guard mission support to the Department of Defense and Combatant Commanders. Pending confirmation by the Senate, on June 18 she would replace Adm. Charles Ray, who has served as the Coast Guard’s No. 2 officer since May 2018.

Fagin graduated from the U.S. Coast Guard Academy in 1985 with a degree in marine science before coming to the UW to earn her master’s in Marine Affairs, a feat she accomplished in just five quarters, something that’s a real rarity. Professor emeritus Tom Leschine, her academic adviser, explains that many master’s students don’t complete the degree in the allotted two years. But Fagin “showed superior work habits and goal-orientation,” he adds. “From the day she arrived, you could tell she was headed somewhere.”

Linda’s master thesis was titled “Improving the Quality of Information in the Marine Transportation System: An Exercise in Risk Reduction.” “What I remember is that she arrived with the idea behind it already formed in her own mind based on her experience with her USCG commands since graduation,” Leschine says. “9/11 had not yet happened, but she saw that many agencies and groups were in the business of security, but often poorly coordinated or in conflict given differences in approach and mandate.”

Fagin’s rise to the first woman four-star admiral in the Coast Guard is not her first time being first. She is the Coast Guard’s first-ever Gold Ancient Trident, as the officer with the longest service record in the marine safety field. She has spent 36 years with the Coast Guard.

Her career has prepared her to become the No. 2 officer in the Coast Guard. She has served on all seven continents, held command roles along the East Coast, and served as deputy director of operations for headquarters at U.S. Northern Command. One particularly impressive assignment came in 2013, when she was posted to NORTHCOM under a detail to the Department of Defense, another assignment that come many people’s way. She was part of the Cheyenne Mountain operation in the even to major catastrophe (nuclear attack, etc.).

“I remember talking to her after that and she remarked that coordination and communication were better but still not what she thought they should be,” Leschine says. She also held positions as captain of the port in Boston and first female commander of Sector New York and captain of the port for New York/New Jersey. In terms of national security from foreign attack, this probably remains the most sensitive post in the U.S.

Homeland Security Secretary Alejandro Mayorkas says Fagin “is a superb leader, who, as the 32nd Vice Commandant, will guide the Coast Guard at a time when its mission of securing our maritime borders, ports and waterways has never been more important. If confirmed, Vice Admiral Fagan would serve as the first woman to be promoted to a four-star rank in the Coast Guard. We are grateful to Vice Admiral Fagan for continuing her service to the country for the trail she has blazed, as for inspiring us all.”

“Vice Admiral Fagan is an outstanding leader with 36 years of Coast Guard operations, policy-making, joint service and interagency experience,” says Admiral Karl L. Schultz, Commandant of the Coast Guard. “Throughout her distinguished career, she has been a top performer and a trailblazer. She will be instrumental in moving the service forward at a critical juncture in our history.”