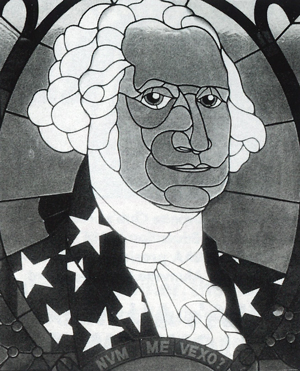 “Num Me Vexo?” That’s the inscription that has vexed observers ever since a stained-glass portrait of George Washington was installed at the South Campus Center in 1972.

The question is who would have incorporated into the portrait an inscription that is an exact Latin translation of the motto of Mad magazine’s Alfred E. Neuman, “What, me worry?”

Lo’ these years the perpetrator’s identity has remained a mystery. But a recent campaign by the UW faculty/staff weekly newspaper University Week has flushed out the culprit: It’s the architect himself, David Wright, who designed the center AND arranged for the inscription.

Wright explained that in the early ’70s students had some revolutionary ideas about the center’s design, in keeping with typical student behavior of that time. For example, they asked for a “ready room” for protests, and wanted facilities for sign making.

Wright says he was able to talk the students out of the most outlandish ideas but he felt that a portrait of George Washington, with a whimsical inscription, would be in keeping with the times.

After all, Washington was a true revolutionary.

But Wright insists that “Num Me Vexo?” is not a political statement but instead a humorous comment that helped the students feel some attachment to the center.